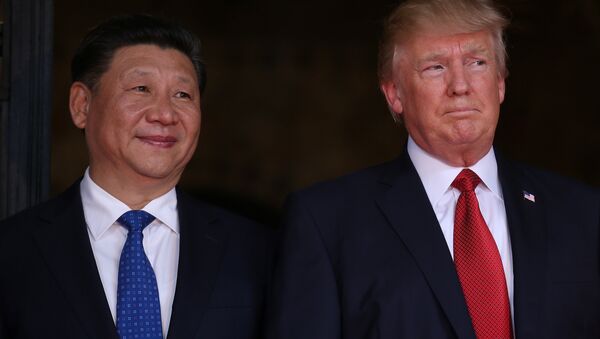 © REUTERS / Carlos Barria
Subscribe
China has called on the West not to resort to military force in response to North Korean missile activity. Simultaneously, Beijing has urged Kim Jong-un to halt his nuclear program in exchange for Chinese protection. It comes as fears of military action the region are heightened following the US decision to send in an aircraft carrier group.

In an official statement on Thursday April 13, China insisted that military force would not be able to resolve the mounting tensions in the Asia Pacific over North Korea's numerous illegal missile tests, some of which have violated the territory of it neighbors, such as Japan.

Meanwhile, in an influential Chinese state newspaper, Beijing has urged North Korea to halt its provocative, and illegal, nuclear program in exchange for Chinese protection. 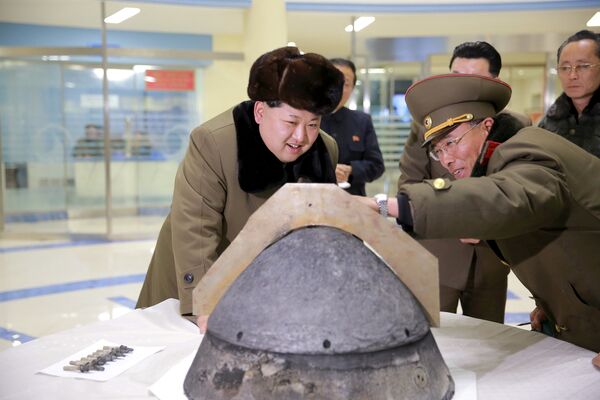 The dual-pronged approach by Beijing comes as a US aircraft carrier is steaming towards the Korean peninsula. A serious show of military strength by the US, the move is being seen as physical evidence that US President Trump is running out patience towards the rogue state.

Trump's public statements — more often than not via his Twitter page — have been bullish towards both North Korea and China — who he has accused multiple times, of not doing enough to rein in Kim Jong-un's many violations of international law.

Some US hawks have praised the president's decision at home, but US ally, South Korea, has publicly stated that they believe the US should consult South Korea before making any preemptive strike against the North. 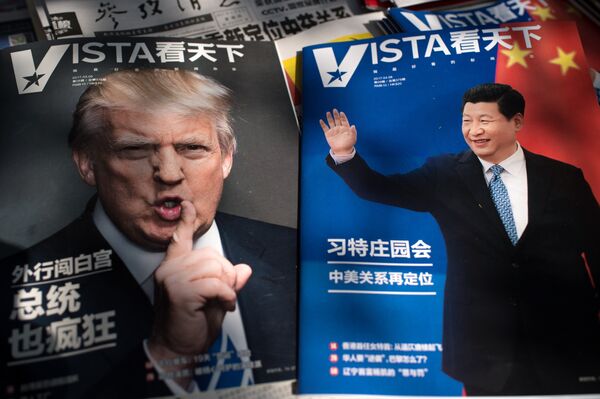 There are fears that President Trump may be tempted down the line of further unilateral military action, following the widespread praise his administration received following last week's US strike in Syria.

However, North Korea heavily relies on China as its sole benefactor, and analysts suggest that any actions taken solely by the US, without China's help, are unlikely to succeed.

The SEAL Team 6, also known as the Special Warfare Development Group, killed the Al Qaeda leader in Pakistan in May 2011

Some British media outlets have published speculative reports that SEAL Team 6, the group of Navy SEALS behind the death of Osama bin Laden in Pakistan in 2011, are training to "incapacitate" Kim Jong-un, should Presidnt Trump wish to do so.

Such a flagrant disregard for international law and sovereignty would likely severely erode US-China relations.

However, there has been some indication of cooperation between both countries this week.

Since Pyongyang tested a new intermediate-range missile in mid-February 2017, China banned all imports of coal from North Korea.

On Tuesday 11 April, President Trump hailed the Chinese action as a "big step" towards cracking down on the rogue state.

"We have a very big problem in North Korea. And, as I said, I really think that China is going to try very hard, and has already started," Trump said.

"A lot of the coal boats have already been turned back — you saw that yesterday and today — they've been turned back," he said. "The vast amount of coal that comes out of North Korea going to China, they've turned back the boats. That's a big step, and they have many other steps that I know about."

000000
Popular comments
Well Donny now if you want to go up agaist North Korea, you also have to take on China and if China steps in you know who's next. Seems the terrorist American government and its baby murdering military has some critical thinking to do. Critical thinking, something Americans suck big time at. Lol
Mitach2002
14 April 2017, 03:02 GMT
000000
China will screw Trump if he attacks North Korea. Just waiting to see the Trump administration run with their tails between their legs.
raptorabz
18 April 2017, 23:58 GMT
000000
Newsfeed
0
New firstOld first
loader
LIVE
Заголовок открываемого материала
Access to the chat has been blocked for violating the rules . You will be able to participate again through:∞. If you do not agree with the blocking, please use the feedback form
The discussion is closed. You can participate in the discussion within 24 hours after the publication of the article.
To participate in the discussion
log in or register
loader
Chats
Заголовок открываемого материала
Worldwide
InternationalEnglishEnglishMundoEspañolSpanish
Europe
DeutschlandDeutschGermanFranceFrançaisFrenchΕλλάδαΕλληνικάGreekItaliaItalianoItalianČeská republikaČeštinaCzechPolskaPolskiPolishСрбиjаСрпскиSerbianLatvijaLatviešuLatvianLietuvaLietuviųLithuanianMoldovaMoldoveneascăMoldavianБеларусьБеларускiBelarusian
Transcaucasia
ԱրմենիաՀայերենArmenianАҧсныАҧсышәалаAbkhazХуссар ИрыстонИронауОssetianსაქართველოქართულიGeorgianAzərbaycanАzərbaycancaAzerbaijani
Middle East
Sputnik عربيArabicArabicTürkiyeTürkçeTurkishSputnik ایرانPersianPersianSputnik افغانستانDariDari
Central Asia
ҚазақстанҚазақ тіліKazakhКыргызстанКыргызчаKyrgyzOʻzbekistonЎзбекчаUzbekТоҷикистонТоҷикӣTajik
East & Southeast Asia
Việt NamTiếng ViệtVietnamese日本日本語Japanese俄罗斯卫星通讯社中文（简体）Chinese (simplified)俄罗斯卫星通讯社中文（繁体）Chinese (traditional)
South America
BrasilPortuguêsPortuguese
NewsfeedBreaking
12:09 GMTKremlin Says It Hopes for Consistency on Minsk Agreements From Germany After Merkel Leaves
12:02 GMTRussian Presidential Spokesman Says Gazprom Fulfilling All Obligations
11:54 GMTLabour Leader Says it’s ‘Not Right’ to Say Only Women Have a Cervix
11:43 GMT'F**k Them': Carlson Responds to Yet Another Call to Fire Him Over 'Great Replacement' Theory
11:42 GMT'Piece of Scum': UK Labour Deputy Leader Lashes Out at Tories
11:14 GMTUK Transport Minister Calls on Britons to Behave Normally, Says There is No Shortage of Fuel
11:12 GMTHamas Has No Place in Sudan But Will It Give Up on Former 'Base'?
11:05 GMTJapan Should Look Into Having Nuclear Submarines, Candidate for Ruling Party Head Says
11:05 GMTIsraeli Soldiers Shoot Down Nazi Flag Raised Near Outpost in West Bank - Photo, Video
10:52 GMTTaiwan Strait Situation 'Complex and Grim', Xi Jinping Says as He Calls for 'National Reunification'
10:46 GMTHillary Clinton Urges to Call Her 'Madam Chancellor', But Netizens Come Up With Other Names
10:39 GMTGerman Green Party Might Find Some 'Rare Lizards' to Stop Nord Stream 2, AfD Co-Chair Warns
10:35 GMTWorld War II Bomb Suspends Elections at Several Polling Stations in Wuppertal, Germany
09:47 GMTTunisian Lawmaker Says Ennahda Party's Rigidity Led to Mass Resignation of Members
09:41 GMTCanary Island Volcano Continues to Erupt, Forcing More People to Evacuate
09:41 GMTChina Sells Almost $65Mln Worth of Carbon Dioxide Emission Quotas, Environment Ministry Says
09:28 GMTIRGC Commander Says 'US Hand-Made Armies' Failed to Tackle Terrorists in Afghanistan, Iraq
09:21 GMTKate’s 'Coolness' and William’s 'Bullying' Led to Rift With Harry and Meghan, Book Claims
08:21 GMTIndia’s Main Opposition Party Takes a Dig at Grand Celebration on PM Modi’s Return From US
08:11 GMTPolling Places Open for Parliamentary Elections in Germany