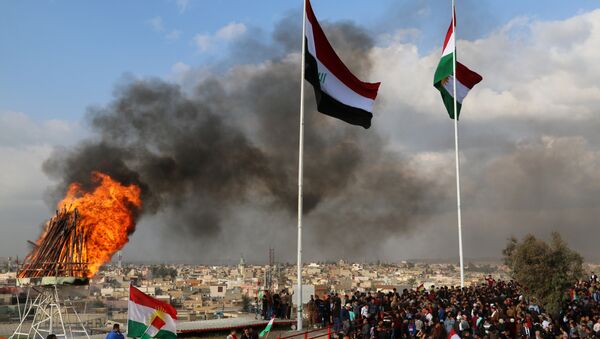 Turkish President Recep Tayyip Erdogan on Tuesday asked the administration of the Iraqi province of Kirkuk to remove the flags of Iraqi Kurdistan and to hoist up Iraqi banners instead.

ANKARA (Sputnik) — According to media reports, the Kirkuk Provincial Council voted in late March to raise the Kurdistan flag, with Turkmen and Arab members of the body boycotting the vote.

The president added that the failure to put back up the Iraqi flags might result in the degradation of the province's relationship with Turkey.

Iraqi Kirkuk Once Again 'Driving Wedge' Between Baghdad and Kurdish Erbil
Earlier on Tuesday, the Turkish Daily Sabah newspaper reported that the Kirkuk Provincial Council decided to hold a referendum on the status of the province in a session that was boycotted by Turkmen and Arab members.

Baghdad claims the control of the province, but the Kurds want it to join the Kurdistan autonomous region in the north of Iraq.

Turkey is also home to a significant Kurdish ethnic minority.