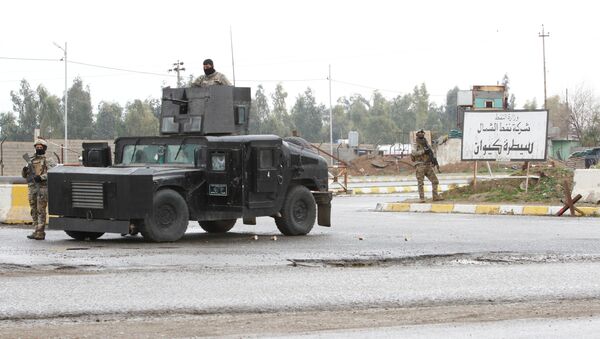 In the follow up to the recent stand-off between the Iraqi authorities and the Iraqi Kurdish parties over the key oil installation in the city of Kirkuk, Kurdish and Iraqi experts explain to Sputnik Arabic what the conflict is all about.

Daesh's Attack on Kirkuk 'Took Coalition by Surprise' Amid Mosul Operation
Iraqi Kurdish political parties and the central government of Baghdad have agreed to continue the flow of oil from Kirkuk’s oil fields through a pipeline to a Turkish export terminal on the Mediterranean en route to the global markets.

The deal comes after the units of Iraqi Patriotic Union of Kurdistan (PUK) last week stormed the state-run North Oil Company (NOC) in Kirkuk, which resulted in briefly stopping oil exports in an effort to force Baghdad to meet its demand for a share of the revenue and add an extra processing unit to Kirkuk’s oil refinery.

The Kurdish group also called for the 2016 Kirkuk oil sharing deal between Baghdad and the Kurdistan region "to be canceled within a week."

The move was aimed at forcing Baghdad to commit to an earlier deal agreed between Kirkuk's governor and the Iraqi oil ministry.

In January, they signed a deal between the province and Baghdad which includes more investment in the oil sector in Kirkuk and employment opportunities for the local people.

Reports however suggested that Baghdad has not paid Kirkuk province its share of revenues from oil sold from its fields since 2013.

On Wednesday, Iraq's oil minister announced that they have added a processing unit to Kirkuk’s oil refinery which increases its capacity by 10,000 barrels a day.

Commenting on the developments, Tarik Jaugar, Advisor at the Regional Parliament of Kurdistan told Sputnik Arabic that the new processing units are needed to meet the needs and demands of the local residents. However if the central government does not deliver on its promises then the regional politicians will decide to stop oil exports from the province.

"Our people lately have not been tracking the fulfilment of these agreements due to the ongoing fighting against Daesh," he told Sputnik.

Kirkuk Province Residents Want Region to Be Part of Iraqi Kurdistan
The politician further explained that Kurdish Peshmerga units have been actively fighting against Daesh, securing the return of civilians to their homes thus losing its grip on the fulfilment of the deal.

"Today's developments are the result of the concessions of the former government," he told Sputnik.

"When back in 2010 then Prime Minister al-Maliki wanted to remain in power for the next term, he offered the leaders of Iraqi Kurdistan to get their share of the Kirkuk oil in exchange for their support of his candidacy in the elections," he explained.

Then, he said, an article 140 was added to the country's Constitution which was supposed to help the Kurds to anchor their right for Kirkuk. The Kurds do need this region as without it, they do not have any resources, the analyst further said. The region holds 5 per cent of the world's oil resources.

However he further noted that none of the parties are eager to retreat, hence there is every opportunity that it is going to grow into a prolonged conflict.