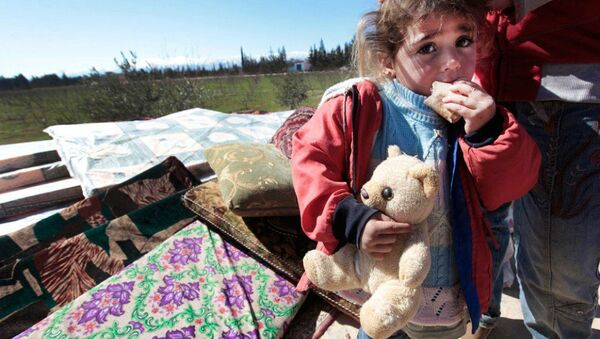 © Photo : Help to children of Syria/vk.com
Subscribe
Officers from the Russian Center for Syrian Reconciliation took patronage over an orphanage located in the Syrian city of Aleppo, according to RIA Novosti.

'Join Us or Die': Aleppo Kids Tell Russian Media About Ordeal Under Jihadists
The damage wrought during the Battle for Aleppo extends beyond the ruins of what was once Syria's economic capital. Countless children lost their parents and found themselves alone, with no escape. Their plight compelled officers from the Russian Center for Syrian Reconciliation of Warring Parties to take responsibility for a local orphanage, RIA Novosti reported.

It took a year for war to arrive in what had been Syria's largest city, and when it did, the struggle between government troops and Islamist militants literally ripped the city in two. Between July of 2012 and December of 2016, Aleppo was rocked by the deadly clash as the opposing sides vied for control of its streets.

Finally, in December 2016, the badly scarred city was liberated by Syrian government forces. While many families had managed to flee to government-controlled areas of the country or abroad to Turkey, Lebanon and other countries, others were not so lucky. 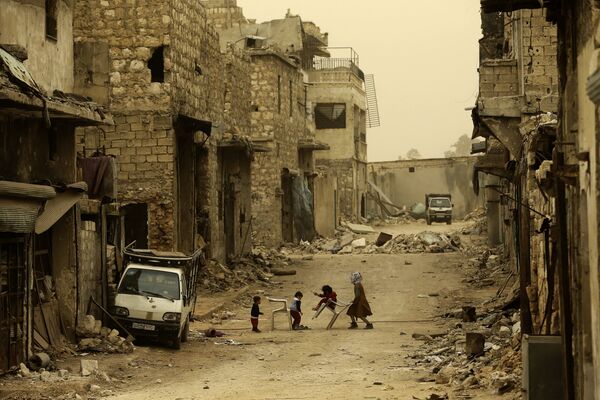 Syrian children play during a sandstorm in the Karm al-Jabal neighbourhood in the northern city of Aleppo on March 10, 2017
© AFP 2022 / JOSEPH EID

"Now there are 37 orphans in our shelter. We are doing our best to help them feel at home here and become one big family," Aleppo orphanage head Muhammad al-Tayeb was quoted by RIA Novosti as saying.

He was echoed by orphanage teacher Bayan Lazhini, who said that each and every child in the shelter lost all their relatives and that many children were in dire need of psychological help.

She recalled that "there are many homeless children in Syria now" and that "before the war, there were no orphanages in Aleppo because there was always someone who could adopt a child if their parents passed away." 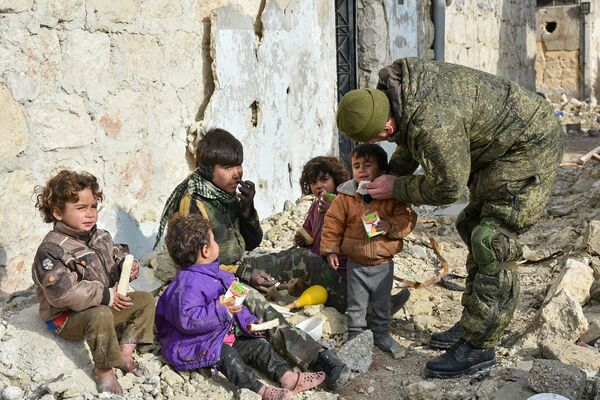 Military engineers of the Russian Army's international counter-mine center are seen in an Aleppo street with children. File photo
© Photo : Ministry of defence of the Russian Federation
/
Go to the photo bank

The Aleppo shelter operates thanks to donations of the city's residents and assistance from servicemen from the Russian Center for Syrian Reconciliation, who every week send a pick-up truck loaded with flour, sugar, buckwheat and other foodstuffs  to the orphanage.

"They are children of war who do not know what a peaceful life is. They also do not know the words mom and dad," deputy head of the center Andrei Kotenok said.

Apart from sending food, the Russian servicemen also pay regular visits to the Aleppo orphanage, where they pass out candy and Russian Army patches to the children, according to RIA Novosti.

Additionally, the Center is supplying humanitarian aid to those front-line areas near Aleppo which are not visited by international public organizations due to security concerns.

"Right now, there are ten [metric] tons of food at our warehouse which will [soon] be delivered to refugees in areas located hundred kilometers from Aleppo," Kamal Sulaimanov, head of the Center's supply depot, said.

On March 31, the center said in its daily bulletin that it has delivered six metric tons of humanitarian aid to residents of Syria's Aleppo Province in the past 24 hours. Although the city of Aleppo is in government hands, the surrounding region is contested between Islamist militants, the terrorist group Daesh, the Syrian military, American-backed Kurdish forces and Turkish troops.

Russian MoD Explains Difference Between Operations in Aleppo and Mosul
On Thursday, UN Under-Secretary-General and Emergency Relief Coordinator Stephen O'Brien told the UN Security Council that humanitarian aid access in Syria has not improved this year, with UN convoys experiencing difficulties in reaching those in need.

Russia has been providing Syrian civilians with medical help and regular humanitarian aid deliveries, including food, medicine, and essentials. Children are provided for on a daily basis, in order to help them survive until peace is restored in the country.