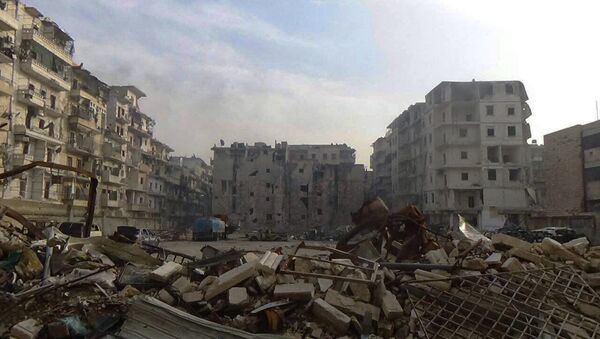 © Sputnik / Mohamad Maruf
/
Go to the mediabank
Subscribe
International
India
Africa
The campaign to liberate eastern Aleppo resulted in the destruction of many schools. Media and officials rushed to blame the Syrian government and their Russian allies of deliberately targeting the places of learning. Now, with the smoke from the fighting cleared, journalists have discovered that the schools were actually occupied by jihadists.

During last year's campaign to liberate eastern Aleppo from jihadist militants, more than half of its schools were destroyed. Western politicians, pundits and media instantly jumped to point the finger at the Syrian government and Russia. Damascus said that the schools were filled with militants, not children. Several months after the end of the fighting, journalists on the ground have begun searching for the truth.

RT correspondent Lizzie Phelan decided to pay a visit to one of the schools formerly occupied by the Nusra Front (al-Qaeda's affiliate in Syria). What the journalist discovered was a militant weapons storage facility and makeshift factory for the production of improvised explosive devices (IEDs).

Despite having been cleared by demining teams, the former place of learning is still filled with residues of explosives and chemicals used to make bombs. Among the debris were empty bags marked ammonium nitrate (made in Turkey), along with metal barrels used to mix the explosives, which would then be put into gas cylinders, rockets, mortars, and whatever other means of delivery the militants could get their hands on.

'When I Grow Up I'll Arrest All Terrorists': Aleppo Children Tell Their Stories
Phelan observed that "even though this school has been cleared by demining teams, the dangers are still everywhere –buckets full of explosive leftovers, these buildings are unsecure." Unfortunately, she added, the former militant strongholds have been turned into 'children's playgrounds'.

Children showed the journalist the basement of their school, which they said militants had once used as a jail.

A few months after the end of fighting in Aleppo, the journalist noted that "there are trickles of people slowly beginning to return to their heavily damaged homes, kids also returning to some of the public schools."

Overstretched and undermanned, the government has had to resort to putting signs on the walls of schools, "warning children how to identify unused IEDS, mines, and ammunition." That, Phelan observed, is "the legacy of rebels who once used these schools as their bases."