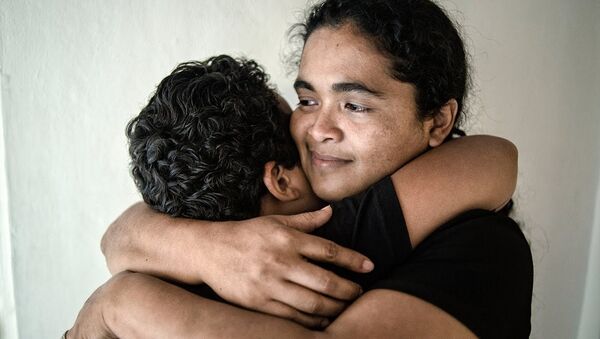 © YouTube/Center for Reproductive Rights
Subscribe
A woman from Salvador granted asylum in Sweden has become the first person to be given such political protection over abortion-related persecution.

Maria Teresa Rivera of El Salvador was accused of attempting to give herself an abortion in 2011 when, at seven months pregnant, she suddenly began bleeding and ended up miscarrying in a restroom. Finding Rivera unconscious, her family called the hospital — the staff of which reported her to police on suspicion of trying to provoke an abortion. Guatemala has some of the world's strictest anti-abortion laws, and abortion is illegal in the country except in cases where the mother's life is endangered by the pregnancy.

Rivera was convicted of aggravated homicide for her miscarriage and sentenced to 40 years in jail in 2012. While in jail, she became an advocate for abortion rights in her country, helping promote a law proposed to Salvador's Congress last year that would at least allow abortions of fetuses so deformed they would not be viable, or in cases of rape or sex-trafficking, TeleSur reports. (The same year, another proposed law would have raised the maximum sentence for having an abortion to 50 years in jail.)

Rivera's case was overturned in May 2016 when a higher court ruled that errors had been made in her trial and that there was an overall lack of evidence that she had committed any crime. She told Rewire afterward, "I understand that many women didn't want to tell others why they were there because they were treated so badly. They called us ‘baby eaters' and more, and sometimes hit us or threatened us. But I knew I hadn't done anything wrong, and I spoke up. Other women came to me secretly to tell me why they were there and asked me to put them in contact with my lawyer so they could get help."

And only a month after her release, prosecutors appealed the decision to let her go, attempting to re-try her. "I just don't understand the prosecutor's motivation for this appeal," Rivera said. "We are very poor, and there is no one else but me to provide income for our family." Rivera's son was 11 years old at the time.

​"This case exemplifies the Salvadoran government's criminalization of poverty and the social stigma with which many poor and marginalized women live under this government," Veronica Reyna of the Catholic Passionists' Human Rights Office in San Salvador told TeleSur. "Instead of repairing the damages that were done, the State looked to criminalize her once again."

Fear of being convicted again for her miscarriage and the stigma of being called "baby killer" in the street led Rivera to leave her country for protection elsewhere. "The societal and work-related discrimination, along with the judicial persecution that I faced every day, brought me to the decision to leave my country," she said in a video message reported by Rewire.

"I couldn't give my son a future. He was exposed to the discrimination and dangers in the country," she explained.

Late last month, the Swedish Migration Agency officially granted Rivera and her son legal protection in Sweden, concluding that Rivera's treatment during her trial and even after her release was "severe enough to qualify as persecution," and that there was no "good reason to assume that the treatment she endured in the past will not be repeated."

The agency also found that it was "clear that this [political] persecution is rooted partly in her sex as female," and "political opinions."

Rivera's asylum application had been supported by the Center for Reproductive Rights, which provided several briefs on her behalf. The center said it was grateful to Sweden for providing Rivera and her son with a place to live in peace.

Rivera intends to continue her advocacy, despite living far from her country.

"I'm breaking the silence for my compañeras still in prison in Salvador," she said. She still wants to see abortion reform in Salvador.

"I want the government to approve the reform…. This will help women and girls, girls who are being raped. Many families are being broken, separated for this situation," she told Rewire.

She also called the proposed bill to toughen sentences for women seeking abortions "a death penalty for poor women."

"These laws apply only to women, and only to poor women," she pointed out.

At a March 21 press conference, Moerna Herrera, president of the Citizens Group for the Decriminalization of Abortion, said the asylum decision set a historic precedent for Salvador and the world.

Many other women remain imprisoned in Salvador in situations similar to Rivera's: obstetric emergencies classified as illegal abortion attempts.

000000
Popular comments
Yeah, but it's Sweden, with its all female government and where the first thing out of a newborn's mouth there is, "Did I make it through?" Abortion has been an everyday event there since the end of WWI. Get the picture? If not, look for hers on every billboard, milk carton, cereal box as she will be the poster child for women's rights all over the civilized would which will not include Central America. And look how Sputnik falls all over itself by referring to her services as "obstetric emergencies". Show us your license to even practice medicine, lady.
marcanhalt
2 April 2017, 02:15 GMT1
000000
Newsfeed
0
New firstOld first
loader
LIVE
Заголовок открываемого материала
Access to the chat has been blocked for violating the rules . You will be able to participate again through:∞. If you do not agree with the blocking, please use the feedback form
The discussion is closed. You can participate in the discussion within 24 hours after the publication of the article.
To participate in the discussion
log in or register
loader
Chats
Заголовок открываемого материала
Worldwide
InternationalEnglishEnglishMundoEspañolSpanish
Europe
DeutschlandDeutschGermanFranceFrançaisFrenchΕλλάδαΕλληνικάGreekItaliaItalianoItalianČeská republikaČeštinaCzechPolskaPolskiPolishСрбиjаСрпскиSerbianLatvijaLatviešuLatvianLietuvaLietuviųLithuanianMoldovaMoldoveneascăMoldavianБеларусьБеларускiBelarusian
Transcaucasia
ԱրմենիաՀայերենArmenianАҧсныАҧсышәалаAbkhazХуссар ИрыстонИронауОssetianსაქართველოქართულიGeorgianAzərbaycanАzərbaycancaAzerbaijani
Middle East
Sputnik عربيArabicArabicTürkiyeTürkçeTurkishSputnik ایرانPersianPersianSputnik افغانستانDariDari
Central Asia
ҚазақстанҚазақ тіліKazakhКыргызстанКыргызчаKyrgyzOʻzbekistonЎзбекчаUzbekТоҷикистонТоҷикӣTajik
East & Southeast Asia
Việt NamTiếng ViệtVietnamese日本日本語Japanese中国中文Chinese
South America
BrasilPortuguêsPortuguese
NewsfeedBreaking
11:28 GMTLavrov: US Medium-Range Missiles May Soon Be Deployed in Europe
11:16 GMTMLB Enters Its First Lockout in 26 Years Amid Spat Between Owners and Players
10:52 GMTFormer Austrian Chancellor Kurz Announces He's Leaving Politics
10:40 GMTGT Investigates: US War-Mongering Under Guise of ‘Democracy’ Inflicts Untold Damage on The World
10:34 GMTNASA Astronauts Perform Spacewalk Outside ISS
10:13 GMTMo Salah Laughs Off Ballon d'Or Snub as Liverpool Star Powers the Reds to Dominant Win Over Everton
10:12 GMTLeopard Breaks Into Classroom, Attacks 10-Year-Old Student in India’s Uttar Pradesh - Video
10:08 GMTThe Mail on Sunday Loses Appeal in Breached Privacy Case Filed by Meghan Markle
09:59 GMTChinese Tennis Player Peng in Good Condition, Safe - IOC
09:51 GMTBoris Johnson Slams Facebook Saying ‘Too Many Gangs Using Social Media’ to ‘Fuel' Migrant Crisis
09:44 GMTOSCE 'Unable to Fix Political and Diplomatic Mess' in Balkans, Former USSR, Says Military Observer
09:35 GMTEuropean Leaders Pay Tribute to Late French Ex-President Valery Giscard d'Estaing
09:06 GMTIsrael Has Exerted Efforts to Fight Air Pollution, But Has It Done Enough?
08:57 GMTEx-Austrian Chancellor Kurz Expected to Give Statement Amid Reports of His Withdrawal From Politics
08:51 GMTJapan's Nissan Announces Creation of Lunar Rover Prototype
08:34 GMTLive Updates: COVID Omicron Variant Found in Paris Region on Person Who Returned From Nigeria
08:07 GMTChurch of Sweden Under Fire For Calls to Investigate Israel for 'Apartheid'
08:03 GMTEpstein Accuser Claims Sex Predator Took Her to Meet Trump When She Was 14, Alleges No Wrongdoing
08:02 GMTNorway's Top Medical Bureaucrat Says Three COVID Shots Not Enough, Fourth May Become Necessary
07:48 GMTFSB Detains Three Ukrainian Special Agents Who Planned to Blow Up Black Sea Fleet Radio Center Mast