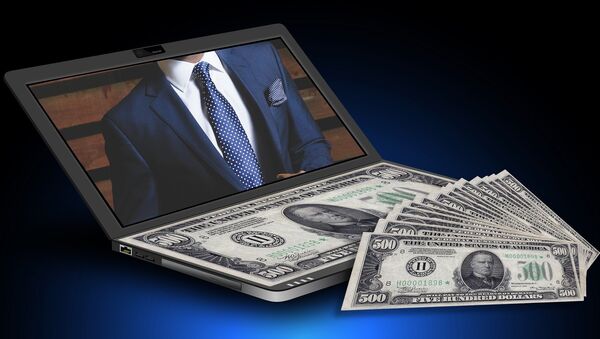 © Photo : Pixabay
Subscribe
The co-creator of the popular Cards Against Humanity party game has vowed to purchase and publish the web browsing history of all members of Congress if President Trump signs into law a controversial bill allowing Internet Service Providers (ISPs) to sell individuals' internet usage data without their knowledge or consent.

If it becomes law, the bill would eliminate rules set by the Federal Communications Commission requiring ISPs to ask permission before selling a user's browsing history and app usage information to advertisers, and allow every company that provides internet access in the US to sell everything they know about users to third parties.

Thursday: #Senate continues on #SJRes34, Protecting the Privacy of Customers of Broadband and Other Telecommunications Services Rule.

Trump Kills Internet Privacy Rules, Ignores User Reality, Ex-FCC Official Says
While the White House has claimed the law would allow service providers to be treated as "fairly" as other web companies, the proposals have proven extremely controversial, with Gigi Sohn, former Counselor to former FCC Chairman Thomas Wheeler, telling Sputnik the measures amounted to "stripping privacy protections from consumers so they have nothing."

"I think the answer is raising the bar, not lowering it. What Congress has done is taken the bar away. It's an absolute race to the bottom," she said.

Activists are not taking the measures lying down, however. As of March 31, two separate online fundraising efforts have raised around US$215,000 — to purchase and disclose the browsing histories of lawmakers themselves.

One is led by "Supernatural" TV star Misha Collins, and has raised over US$71,000 from around 3,000 individuals.

Thanks, Congress, for voting to put all of our private data up for sale! We can’t wait to buy yours. https://t.co/t8pq3p470f

The other was launched by net neutrality activist Adam McElhaney, has far surpassed its original goal of US$10,000, with over 10,000 donating a total of almost $165,000. McElhaney wants to reveal "everything" in lawmakers' browsing history, including "medical, pornographic, financial and infidelity."

This has been a humbling experience. Never did I imagine I would get this much support! We have raised nearly $100k for this cause!

Now Max Temkin has weighed in to the effort, likewise promising to purchase Congress members' web browsing histories and publish them online.

If this shit passes I will buy the browser history of every congressman and congressional aide and publish it. cc @SpeakerRyan https://t.co/cOL3mx6JuG

Temkin is notorious for his pranks, which often target political figures. He recently started a concerted campaign of dispatching potatoes to representatives he feels aren't pulling their weight. Likewise, Cards Against Humanity has a history of humorous political activism.

However, contrary to the tactics of Collins and McElhaney, Temkin has offered to simply purchase the data himself, rather than use an online fundraising campaign to stump up the necessary capital.

Moreover, he has specifically cautioned against such campaigns, saying potential donors should be "wary" — and they amount to a "scam."

@DavidAns this site is raising $1m on gofund me for promises they cannot possibly deliver on, it is a scam

Temkin has also hit back at individuals who have criticized his "failure" to have already purchased the data — after all, as the bill isn't law yet, nobody knows what kind of data will be available — or how and whether people will be able to buy it, he by definition can't presently.

"People are already mad at me that we haven't released the data. As a reminder, this bill hasn't been signed yet and there is no data to buy… it will take months for ISPs to make this data available. If and when it is, I will do everything possible to buy and release it," he wrote in two separate Tweets.

People are already mad at me that we haven't released the data. As a reminder, this bill hasn't been signed yet and there is no data to buy. https://t.co/VYMJsu7d2U

It is highly unlikely that if and when the bill is signed into law, purchasing net histories will function as an open market, with anyone able to buy a specific individual's or set of individuals' internet data at their behest. It is probable the "market" will function in the same way advertisers currently buy data from Facebook and Google — in aggregate, brokered via established relationships.

Nonetheless, for individuals concerned by the ramifications of the bill, there are a number of options available.