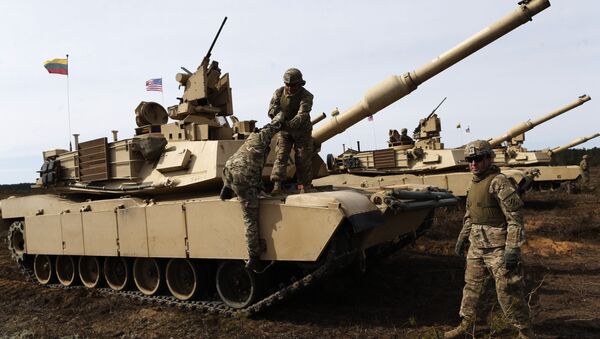 US Army Deputy Chief of Staff Lt. Gen. Mike Murray said that the M1 Abrams main battle tank is aging and the Army will soon need a replacement. For a longtime, the Pentagon has been focused on modernizing the Navy and the Air Force. However, tanks remain an inherent component of modern warfare.

"I think the Abrams is still towards the top of its class in terms of combat systems, in terms of tanks. I think we have parity, I think there is parity out there," Murray told the United States Senate Armed Services subcommittee.

He underscored that since the end of the Cold War Russia has managed to close the gap with the US in terms of tank technologies.

I think the T-90 is probably pretty close [to the Abrams]," Murray said.

M1 Abrams vs. T-90: Top US General Admits Russia Has Achieved Tank Parity
He added that he could not comment on Russia’s newest tanks, the T-14 Armata, because the tank has not yet been widely fielded.

The Pentagon is considering the development of a next-generation tank, with the main requirement to be lighter than the Abrams (54 tons and higher, depending on modifications).

Murray noted that he was concerned that designers have not offered any breakthrough technologies to build a next-generation tank.

"What I worry about is, there is nothing on the near-horizon that indicates a fundamental breakthrough in technology where we can come up with a lighter tank," he said.

The admission of a technological gap in tank design is something new for the Pentagon. For several decades, the M1 was portrayed as a second-to-none battle machine. However, the lack in technology has grown too significant to be ignored.

Russia's Western Military District Tank Division Partake in Snap Drills
Back in the day, the M1 Abrams was the pinnacle of tank design. Its serial production kicked off in 1980, a decade before its Russian-made rival, the T-90 Vladimir (named after its main designer Vladimir Potkin), hit the market.

Initially, the US planned to build a tank to beat the Soviet-designed T-72 which entered service in 1973. The development was conducted jointly by American and West German specialists. The Pentagon needed a replacement for its aging M60 Patton tank developed in the 1950s. Finally, the cooperation project was wrapped up and by 1979 Chrysler developed the M1 Abrams. The tank was named after General Creighton Abrams, commander of US forces in the Vietnam War. The M1 made its combat debut during the Gulf War in 1990-1991.

At the same time, Russia was finishing the development of the T-90 Vladimir tanks. The development began in the late-1980s and the first tanks were built in 1992. Having unveiled the new tank, Moscow narrowed the gap in tank design with Washington. Moreover, the T-90 was lighter (50 tons) than its American rival.

Russia's Rostec in Talks With Saudi Arabia, Kuwait on T-90 Tank Deliveries - CEO
The Achilles’ heel of the Abrams is its massive weight. It creates problems for its deployment at long distances. The Abrams is powered with a gas-turbine engine which is more powerful but less efficient than the T-90’s diesel engine.

The armored bodies of the Abrams and the T-90 are massively reinforced in the front while their rear parts have weaker armor.

The first versions of the M1 were equipped with Chobham armor, a composite armor developed by British engineers. Later, the Abrams received a new special armor incorporating depleted uranium. In addition to the armor, some Abrams tanks are equipped with the AN/VLQ-6 protection device that can impede the guidance system of anti-tank missiles.

The T-90 has a dynamic protection system, including composite armor, explosive-reactive armor, smoke-grenade dischargers and the Shtora and Arena intercepting systems. 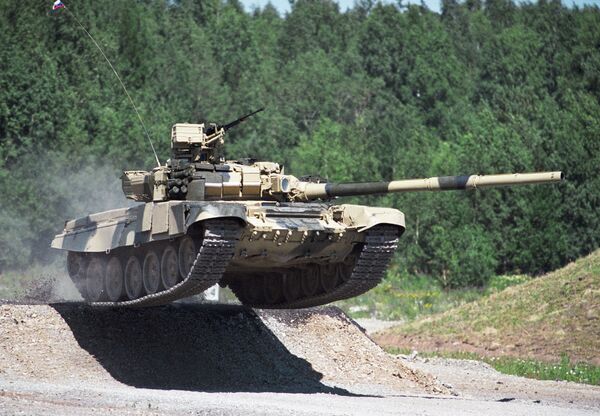 There have been repeated attempts by experts and the media to compare the two battle machines. However, it is hard to decide the winner since the M1 and the T-90 are tanks of the same generation, encompassing the most advanced technologies of their day.

Possibly, the reason behind the Pentagon’s concern is the T-14, Russia’s next-generation main battle tank.

Russia's New Air Defense System to Be in Line With Armata Tank
The Russian manufacturer Uralvagonzavod began the development of the Armata platform in 2009. In September 2013, a prototype was unveiled at the Russian Arms Expo in Nizhny Tagil. In 2014, the first 10 Armata tanks were built and their tests began. In 2015, the new tank entered serial production.

The Afganit active protection system is a complex defense mechanism developed by the KBP Instrument Design Bureau. The system employs a combination of active phased antenna array radars and UV detectors to identify and track incoming projectiles, and mini-mortar systems which use fragmentation rounds to intercept and destroy incoming threats in midflight. 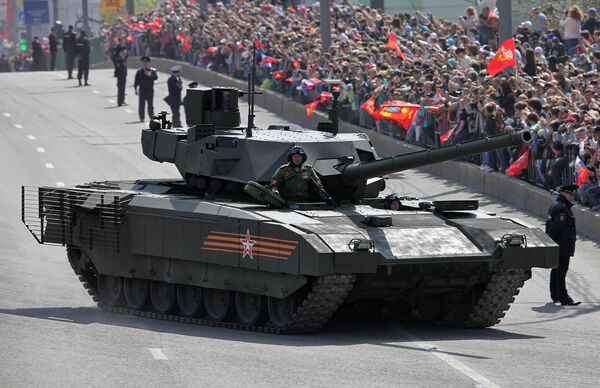 In an interview with RT, Russian military expert Vladimir Yazikov said that Russia is not the only country currently developing next-generation tanks. A series of brand-new technologies are used in the French Leclerc tank. In addition, Israel and South Korea have formidable tanks.

German Media Admits Russia's T-14 Armata Tank is Breakthrough in Military Field
However, many analysts note that only Russia has already built a next-generation tank.

As for the US, the main reason is that the Pentagon has long been focused on modernizing its expeditionary forces and the US Air Force.

"In the US, the majority of funds are spent on aviation and the Navy. These two military branches can be used to form an operative force. At the same time, the army receives less money. The US is a typical naval power," Viktor Murakhovsky, a Russian military expert and editor-in-chief of the magazine Arsenal Otechestva, explained.

Despite the fact that the M1 has been upgraded, the American tank cannot hold a candle to the Armata, according to the expert.

"American companies are not developing new-generation tanks because there have been no orders from the Pentagon. Some companies are conducting some R&D but no prototypes have been presented," Murakhovsky added.