US Army Deputy Chief of Staff Lt. Gen. Mike Murray has told a Senate Armed Services subcommittee that the US faces falling behind other countries in the area of tank technology, saying that other nations, including Israel, the UK and particularly Russia are close to catching up. Russian observers ponder the significance of the general's remarks.

In a speech before Senate defense subcommittee members last week that went largely unreported, Lt. Gen. Murray warned that the US no longer has the edge in tank technology it used to, saying that he could "not say that we have the world class tank that we had for many, many years."

US Deputy Chiefs of Staff: Army Forced to Rely on Weapons Systems Built in 1980s
"I'll be the optimist and say that we're at parity with a lot of different nations," Murray noted. Still, the officer stressed that "our most capable enemies are closing quickly."

"I think the Abrams is still towards the top of its class in terms of combat systems, in terms of tanks," Murray said. "I think we have parity, I think there is parity out there." Still, he warned that Russia has closed the gap it had with the US since the end of the Cold War. "I think the T-90 is probably pretty close," he told one senator.

As for Russia's newest generation tank, the Armata, the officer said that he couldn't comment on that, since the tank has not yet been widely fielded.

Murray emphasized that the M1 Abrams platform, introduced in the 1980s, is reaching the end of its upgrade potential, and suggested that it's time for the US to start development of a new generation tank. "We're just about reaching the limits of what we can do with the Abrams," he said.

Despite Striking Resemblance Iran's Newest Tank is no Match to Russia's T-90
At the same time, the officer said that he was concerned that designers have not offered any fundamental breakthroughs in technology which can be used to build this next generation tank: "What I worry about is, there is nothing on the near-horizon that indicates a fundamental breakthrough in technology where we can come up with a lighter tank. I think we would be mistaken to build another 75-ton tank as long as  protection requirements are where they are," Murray stressed.

Commenting on the unusual frankness of the top US Army official's remarks, RT Russian contributor Nadezhda Alekseeva suggested that "the recognition of its own technological lag in the area of tank building is something new for the US military. For decades, the US had presented the M1 as the best piece of equipment in its class, one no rival could match."

Today, the journalist writes, "the technological gap has become so obvious that it is impossible to keep silent about it." 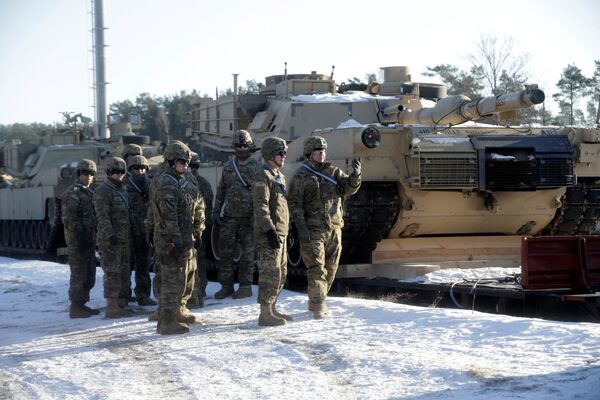 U.S. soldiers stand next to the M1 Abrams tanks that will be deployed in Latvia for NATO's Operation Atlantic Resolve in Garkalne, Latvia February 8, 2017
© REUTERS / Ints Kalnins

Russia's New Air Defense System to Be in Line With Armata Tank
After all, the journalist recalled, in Russia, the idea that the US and its allies are lagging behind Russia's tank industry is nothing new. Two years ago, Deputy Prime Minister Dmitri Rogozin reacted to news that Germany and France were planning to build a new generation of tanks to match the T-14 Armata by pointing out that he estimates other countries to have fallen behind Russia by 15-20 years in this area. Rogozin stressed that playing catchup would be difficult, too, since obviously Russia's tank designers wouldn't just sit idle over the next two decades.

For his part, independent military analyst Vladimir Tuchkov suggested that frank or not, the purpose of Murray's speech was pretty obvious: to squeeze more money out of the government to develop new heavy armor.

The problem, he wrote, was that the general did not provide a very convincing argument to Congress about the need to allocate new billions for a new tank, when he himself admitted that US engineers do not have any fresh ideas. "A further increase in the size and weight of the tank would only turn an already unwieldy tank into a slow-moving dinosaur," the journalist noted, driving Murray's point home.

Looking back on the Abrams' proud history, Alekseeva suggested that in its own time, the M1 truly was a crowning achievement in technical terms, having been released over a decade before the appearance of its Soviet/Russian competitor, the T-90, which entered service only in 1993. 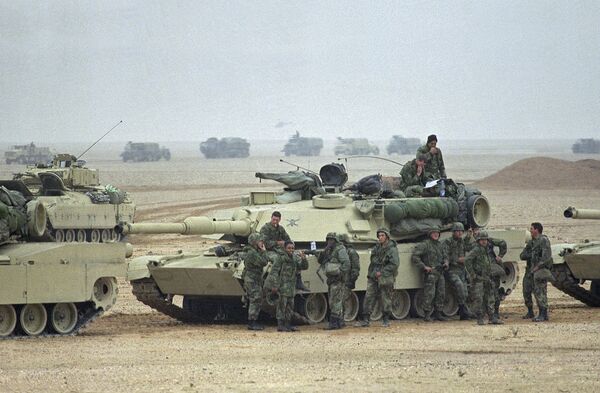 Chrysler developed the Abrams in 1979, and the formidable machine began to enter service in the US Army in 1980, replacing the aging M60. The tank was considered to have had a successful 'baptism by fire' in the first Gulf War in 1991, easily defeating the tank forces of the Iraqi army, equipped with Soviet monkey model T-55s, T-62s and T-72s, cutting into them like Swiss cheese and suffering almost no casualties from enemy tank fire.

However, since then, beginning with the second Iraq war and continuing with the Iraqi army's war against Daesh (ISIL/ISIS) terrorists in 2014, the tank began showing a growing number of weak points.

General Dynamics Provides Tech Support for Kuwait, Saudi Abrams Tanks
With this in mind, Tuchkov suggested that the "powerful advertising by General Dynamics Land Systems [the Abrams' current builder] notwithstanding, the number of lost Abrams tanks completely negates the assertion that it is one of the best tanks in the world." In fact, the military writer boldly suggested that the Abrams is no longer even in the top 5, with Israel, Germany, the UK, South Korea and Russia all producing tanks with far superior technical and combat characteristics.

He recalled, for instance, that the US lost 80 Abrams in Iraq during the 2003 invasion, out of a total of 1,135 machines deployed. "As for tanks disabled by enemy fire and due to serious damage suffered by major components and systems, the picture is just depressing," Tuchkov wrote. In 2006, "the army had to ship 530 tanks –i.e. almost half of those deployed, off for repair in the US." 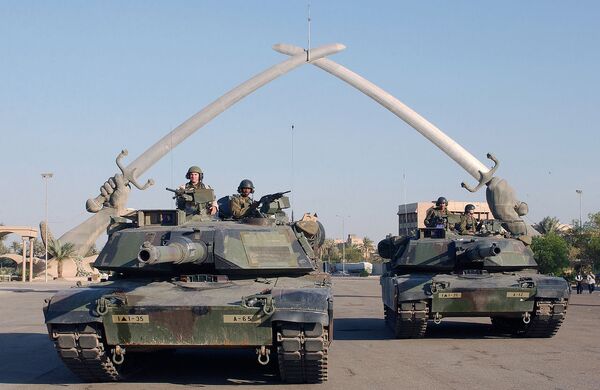 "But that too didn't help much," the journalist wrote. "According to various sources, between 30 and 47 Abrams have been lost from last autumn to the present in northern Iraq" in the ongoing campaign against Daesh.

As for Russia and its T-90, it has a lower profile, a higher top speed, a longer operational range, and at 46.5 tons, weighs a full 16.5 tons less than the 63 ton US behemoth. It has partial dynamic protection by default, with no additional skirt installations required, and according to Tuchkov, has demonstrated its prowess in the Syrian conflict. 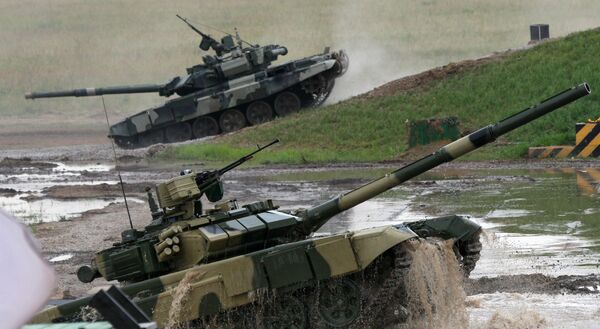 The Syrian Army, Tuchkov recalled, has an undisclosed number of T-90As, the first version of the tank which saw mass production. "Since 2014, the Syrian Army has lost only one T-90 to an American TOW missile."

Just as significant, the observer suggested, was the fact that the loss occurred "not due to the tank's weakness, but due to poor crew training, and their failure to follow safety instructions." Specifically, the onboard Shtora-1 infrared ATGM jamming system was switched off at the time of the militants' attack; the tank's hatches were also open. Abandoned by the Syrian Army, the T-90A has since been captured and used by the militants.

The one lost tank excepted, Syrian T-90s have been successfully used by the Syrian Army's 4th Mechanized Division, usually on the front lines of the Army's key offensives, including the recent offensive to liberate Aleppo.

Ultimately, Alekseeva stressed that while military publications in the US and Russia have made comparisons of the T-90 and the M1 ad nauseam, the truth is that "it's probably impossible to speak of either tank's unquestionable superiority over the other: both tanks belong to roughly the same generation, and both have implemented the best technologies available in their time…Rather, the real cause for concern for the US military is the T-14 Armata, Russia's latest main battle tank."

That tank, developed in the late 2000s by Uralvagonzavod, and starting mass production beginning in 2015, is the real concern for Lt. Gen. Murray and the US Army, the journalist noted. 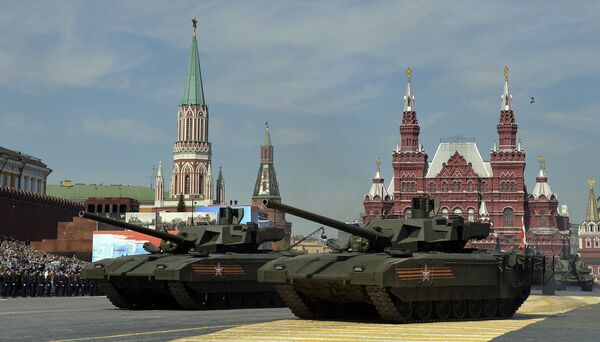 Russian T-14 Armata tanks drive during the Victory Day military parade on Red Square in Moscow on May 9, 2015.
© AFP 2022 / YURI KADOBNOV
Newsfeed
0
Access to the chat has been blocked for violating the rules . You will be able to participate again through:∞. If you do not agree with the blocking, please use the feedback form
The discussion is closed. You can participate in the discussion within 24 hours after the publication of the article.
To participate in the discussion
log in or register
loader
Chats
Заголовок открываемого материала