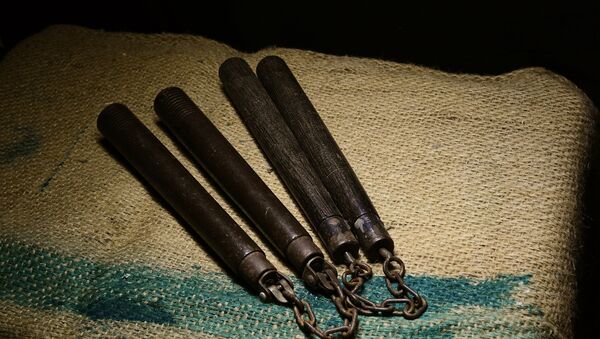 The amount of weapons and other dangerous items seized by the Swedish Customs has been increasing dramatically over the past few years and is still rising. Last year, the Border Guard in Stockholm alone made over four times more seizures than the year before, which is perceived as a token of Swedes' growing insecurity.

Gang Wars Rage in Swedish Ghettos Despite 'Decreasing' Crime
In 2016, the Border Guard in Stockholm seized over 5,200 weapons and other objects deemed as dangerous, which is a marked increase compared to the previous years. In 2015, only some 1,200 items were seized. The majority of the findings were made in foreign mail and parcels. The most dangerous objects were seized at Arlanda Airport, Sweden's largest, where a great deal of overseas mail arrives.

Remarkably, the increase is not in the number of firearms, but rather stun guns, throwing stars, pepper spray, mace and stiletto knives. It is also not uncommon for the weapons arrive in a cleverly disguised form. According to Mats Pettersson, the head of the Border Guard in Stockholm, a typical stun gun is designed to look like a flashlight but also possesses offensive functions.

Last year, the largest increase was in batons, some of which also possessed extra functions, which made them extra risky.

"It is both telescoping batons, the ones that may be collapsed, and the usual rubber type," Mats Pettersson told Swedish Radio, explaining that some of them were combined with electricity, which made them extra dangerous.

Swedes Snap Up Illegal Batons and Stun Guns for Self-Defense
According to Mats Pettersson, the border protection authorities have hardly become better at finding the dangerous objects. Instead, it's the influx of arms and armaments that has increased dramatically.

"You can go online and check out yourself how easy it is to buy these. After only a few clicks, you have already purchased something for only hundreds of kroner and if you are lucky you'll have it delivered in the mail a few days later," Mats Pettersson explained.

Unsurprisingly, the number of reported cases of illegal possession of knives and other cold steel weapons has risen accordingly in both Stockholm County and the rest of Sweden, figures from the National Council for Crime Prevention indicated. This may signal a growing sense of insecurity among Swedes, who are compelled to arm themselves amid a surge of deadly violence.

"I also think young people may find it cool to because it's fun to buy this stuff and have it around," Mikael Jeppson, the head of a youth shelter in Stockholm told Swedish Radio, venturing that the same armament trend is manifest among adults as well.

Sweden Muzzles Its Cops to Uphold Political Correctness
This has coincided with a dramatic surge in deadly violence in Sweden, which saw a drop in spontaneous stabbings, but a rise in premeditated gang murders. Sweden, which saw a protracted decline in deadly violence in the 1990s and the 2000s, experienced a sharp increase from 2015 onwards, the Swedish daily Dagens Nyheter reported. Also, the percentage of crimes solved has dropped.

A recent survey by pollster Sifo indicated that Swedes were currently most worried about crime and violence, Swedish Radio reported.

According to Stockholm Police, Sweden's capital alone boasted at least 49 gangs, which numbered over 700 members and were involved in at least 12 gang wars, the Swedish tabloid newspaper Aftonbladet reported.