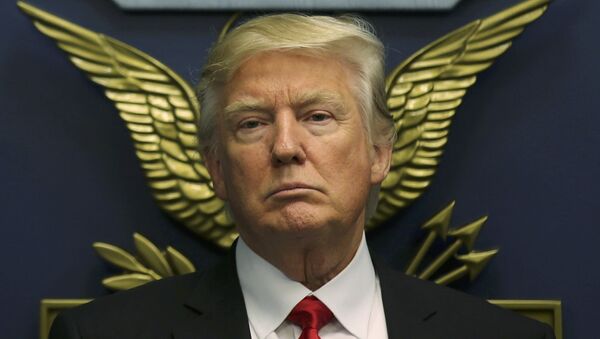 © REUTERS / Carlos Barria
Subscribe
International
India
Africa
EU trade commissioner Cecilia Malmstrom has said the Transatlantic Trade and Investment Partnership (TTIP) trade deal between the EU and the US has hit the blocks because US President Donald Trump - who is against the deal - is one of those who treats such deals on an "I win, you lose" basis.

Malmstrom was speaking in Toronto, Canada, where she is promoting the recently signed — but not yet ratified — EU-Canada trade deal, known as the Comprehensive Economic and Trade Agreement (CETA).

Trump was elected on a promise that he would pursue a protectionist policy of putting "America First" and said he would scrap or renegotiate TTIP, in the same way he vowed to look at the North American Free Trade Agreement (NAFTA), with the US, Mexico and Canada.

But days after coming into power, Trump used his executive powers to withdraw from the TTIP deal, leaving it all but dead in the water.

​"From this day forward it is only going to be America first. Every decision on trade, on taxes, on immigration, on foreign affairs will be made to benefit American workers and American families. We must protect our borders from the ravages of other countries making our product, stealing our companies and destroying our jobs," he said.

In Toronto, Malmstrom said that TTIP was only in "deep freeze" pending a new approach from the US, under the Trump presidency, holding out for a series of bilateral trade deals instead of the combined EU-US TTIP deal.

"Some tend to see trade as a game — I win, you lose. We don't see it like that. We see a trade agreement as, I win, you win," she said, in a clear reference to her perception of Trump's negotiating tactics.

World
Japan 'Bracing for the Worst' in US Trade Negotiations After TPP Failure
In the run-up to the US presidential election, Trump also put the blocks on another trade deal, the Trans-Pacific Partnership (TPP), which was signed between Australia, Brunei, Canada, Chile, Japan, Malaysia, Mexico, New Zealand, Peru, Singapore, the United States, but from which he withdrew, January 2017.

"[The TPP] is another disaster done and pushed by special interests who want to rape our country — just a continuing rape of our country. It's a harsh word, but it's true," he said in a speech, Declaring American Economic Independence, June 2016.

​"The TPP would be the death blow for American manufacturing. It would give up all of our economic leverage to an international commission that would put the interests of foreign countries above our own," he said.

"We do not agree with those who think the answer is to raise barriers. In Europe which has long divided itself by walls and borders, we know those divisions bring anything but freedom and prosperity. We know that unplugging from the global grid is not an option. It would kill jobs, not create them," Ms. Malmström said in a speech to students at the University of Toronto's Munk School of Global Affairs.