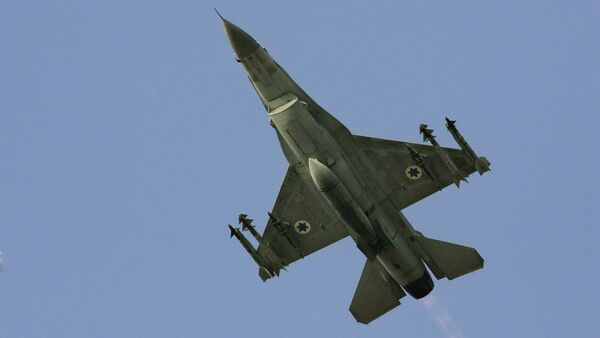 © AP Photo / Ariel Schalit, file
Subscribe
International
India
Africa
The Syrian Army has reported that it has shot down an Israeli F-16 that violated Syrian airspace to carry out an attack on Syrian Army positions near Palmyra. According to Russian political scientist Gevorg Mirzayan, Israel has jeopardized an unwritten Russian-Syrian-Israeli code of conduct, and Moscow's future position in the Middle East.

On Friday, the Syrian Army reported that it had shot down one Israeli Air Force jet, and damaged a second, after a squadron of four Israeli Air Force F-16s had entered Syrian airspace and targeted Syrian Army units near Palmyra. The IDF denied that any aircraft were shot down, but did not deny that the attack itself had taken place.

According to political scientist Gevorg Mirzayan, as far as Moscow is concerned, whether the Israeli plane was lost or not is not what's at stake here. Rather, he suggested, the issue is how Friday's events will affect the very delicate strategic balance in the region.

Russia, Mirzayan recalled, had held consultations with regional powers, including Israel, before starting its counterterrorism operation in Syria in September 2015. This, the expert noted, consisted of an attempt by Russia to establish certain 'rules of the game' which were meant to avoid clashes between the Russian Aerospace Defense Forces and the other parties operating in the country.

As far as Israel was concerned, the expert explained that "the rules were very simple, and as pragmatic as possible. For its part, Tel Aviv did not prevent Moscow from eliminating all the Islamists that its aircraft could reach. This was an absolutely pragmatic approach, because the Israelis saw no difference between the internationally recognized terrorists from Daesh, and the 'green elf' fighters for democracy from the 'secular opposition' in Idlib. Both wanted to destroy the state of Israel; therefore, they needed to be preventatively destroyed, and it didn't matter by whose hands."

Syria Urges UNSC to Condemn Israel Over Attack on Palmyra
In turn, the analyst suggested, Moscow made a de facto pledge to turn a blind eye to Israeli efforts to prevent Syrian ally Hezbollah from transferring Syrian or Russian weapons from Syria to its fight against Tel Aviv.

"For a long time, this scheme worked," Mirzayan said. "But on March 17, it began to glitch up." Pointing to the string of back and forth claims and denials by Damascus and Tel Aviv since Friday morning's attack, Mirzayan noted that all that is known for certain is that a squadron of Israeli aircraft attempted to strike positions inside Syria, and came under attack by Syrian air defenses. "After that, the claims of the two parties diverge."

Syria claimed a victory against the Israelis, whom Damascus said had effectively 'provided air support for Daesh' with their aggression. Israeli admitted that its aircraft had been targeted, but denied that any had been shot down, or that it was assisting anyone on the ground in Syria with its strikes. Israeli media even claimed that the military had intercepted one of the Syrian missiles using Israel's missile defense system.

Experts have warned that the conflict sparked Friday is far from over, with both sides now likely only to harden their positions. This problem, according to Mirzayan, is that both sides now believe that the regional and global balance of power is shifting in their favor – Tel Aviv because it has a new ally in the White House, and Damscus because of its recent string of military victories, from the liberation of Aleppo and Palmyra to its push to the Euphrates.

"At first glance," Mirzayan wrote, "it may seem as though a worsening of the Syrian-Israeli conflict won't be such a big deal for Moscow – all parties understand clearly Russia's neutrality in this scenario." Unfortunately, he added, "the problem is that a direct Israeli-Syrian conflict will immediately grow into a conflict of its allies (the United States and Iran, Hezbollah, the Gulf States), and this will destroy Russia's plans to strengthen its presence in the region after the end of the Syrian war."

Downed IDF Aircraft: Syria's SAMs 'Send a Very Special Message' to the Israelis
Moscow, the expert noted, is interested in regional balance. One of Russia's trump cards in the various conflicts in the Middle East has been its good or at least workable relations with all parties in the region's many conflicts. This, the analyst noted, has allowed Moscow to become the third party in strategic triangles, "to engage in peacemaking between the two other vertices of these triangles and to earn political and economic rewards from doing so."

"However, this system works only on the condition that the balancing party successfully balances, i.e. that it finds common ground and does not allow the situation to be brought to a direct military conflict, which can pull in all other countries in the region. If that happens, the strategic triangles are destroyed, and the balancer is forced either to take the side of one of the participants, or give way to a more efficient competitor that's capable of building new triangles."

And that, Mirzayan noted, means that Moscow will now be forced to conduct some 'sensitivity training' with its Syrian and Israeli partners, in order to prevent the conflict from getting out of hand, and from the reports of downed aircraft turning into confirmed losses.