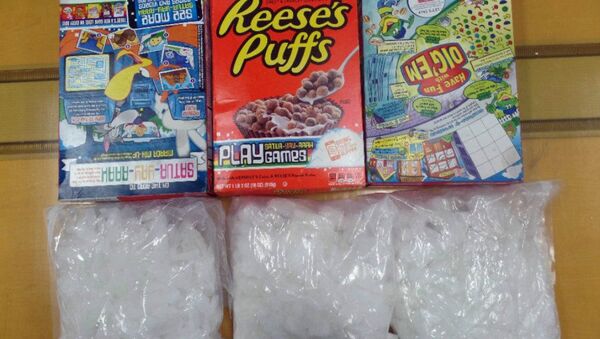 Two South Korean nationals have also been detained, the law enforcement office said. The operation may also implicate four South Koreans with family members living in the US, Stars and Stripes reported.

One of the troops involved with the case has been indicted but not detained, while the other soldier has been imprisoned, South Korean attorneys said. Both are 19 years old and were part of the 2nd Infantry Division. They have denied the accusations that they violated the Narcotics Control Act.

Some reports suggest that the soldiers were acting on behalf of a separate third party whom officials have yet to track down. The second soldier, who was indicted but not arrested following a local court ruling, allegedly accepted money to help deliver the parcel but did not have knowledge of what was in the boxes of Reese’s Puffs and Honey Smacks.

That soldier was reported to have received the boxes of cereal and given them to another soldier, who then supplied the drugs to a civilian. The prosecution has reason to believe there is intent to distribute in this case.

“It’s the largest amount of drugs found coming through the APO [Army Post Office],” the prosecutor’s office told Stripes. The massive meth seizure could have fed or started the habits of 130,000 people. The Supreme Prosecutor’s Office cooperated with the US military and US Drug Enforcement Agency on the case, according to a statement.