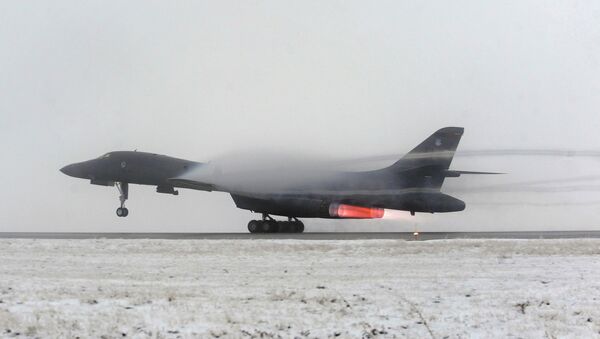 According to the Korean Central News Agency (KCNA), a fleet of B-1B Lancer bomber planes from Guam’s Andersen air base conducted an hour-long stealth flight on Monday over South Korea’s Sangdong firing range as part of a nuclear bombing drill. KCNA claims the exercise is designed to simulate strikes against key DPRK targets.

Tensions have been running high in the region since the assassination of DPRK leader Kim Jong Un’s half-brother Kim Jong-nam in Malaysia, not to mention Pyongyang’s repeated nuclear weapons tests and ballistic missile launches.

The US and South Korea’s joint drills began this month and have two major segments: the Foal Eagle field drills and Key Resolve, which focuses on computer simulations. The drills are expected to conclude in April.

Despite Washington asserting that such exercises are purely defensive, the North sees them as dry runs for an invasion, and criticize the annual drills every time they take place. When the Vinson entered waters off South Korea, Pyongyang warned of "merciless ultra-precision strikes from ground, air, sea and underwater" if the vessel infringed on their sovereignty.

The isolated nation fired four ballistics missiles in a show of disapproval of the exercises earlier this month, and denounced recent trilateral drills by Japan, the US and South Korea to monitor the North’s missiles using destroyers equipped with Aegis. KCNA posits that the probability of rival nations making a preemptive nuclear strike has reached a "very dangerous phase."

Anticipating a reaction, military chiefs from Seoul and Washington warned on Tuesday that Pyongyang might "conduct provocative actions" in response to the drills. General Joseph Dunford wrote a statement saying, "The chairmen recognized the possibility that North Korea could conduct provocative actions during the Key Resolve/Foal Eagle exercise, or in connection with North Korean major political events in April."

Dunford added that he and his counterpart in Seoul, General Lee Sun-jin, had a 30-minute phone call where they "discussed response options."

Last year’s drills included about 300,000 South Korean troops and 17,000 Americans. The numbers will reportedly be similar this year.

Compounding regional strife is the North’s relationship with China, an ally that has grown increasingly concerned over Pyongyang’s weapons testing. On Wednesday, Chinese Premier Li Keqiang analyzed the friction during his annual news conference, stating, "Tensions may lead to conflict, which would only bring harm to all the parties involved … So what we hope is that all the parties concerned will work together to de-escalate the situation, get issues back on the track of dialogue and work together to find proper solutions."

Li added, "It's just common sense that nobody wants to see chaos on their doorstep."

North Korea balked at China banning its coal imports in February, accusing Beijing of "dancing to the tune" of Washington.