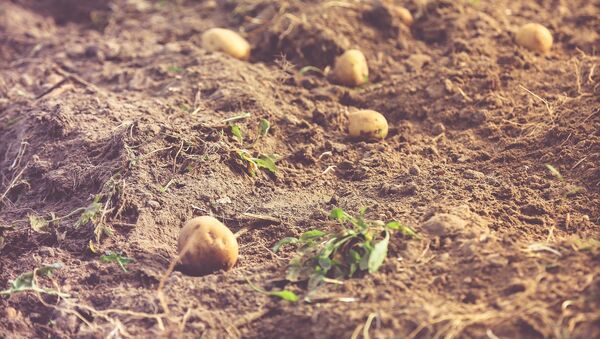 © Photo : Pixabay
Subscribe
The International Potato Center (CIP) in Peru has announced that they have successfully grown potatoes in a hermetically-sealed orbital environment that simulates conditions on Mars, indicating that it is possible to repeat the events of the 2015 film The Martian, by growing crops in red-planet soil.

The interior of the Peruvian CubeSat satellite was designed to mimic Martian conditions as closely as possible, with a thin carbon-dioxide atmosphere and little oxygen. The CubeSat houses soil and tubers, with sensors constantly monitoring the potatoes and sending a livestream to Earth. On Wednesday, CIP announced in a news release that "preliminary results are positive" and that they believe edible potatoes are on the way.

Ordinarily, normal potato plants cannot grow under such extreme conditions, but potatoes have a wide potential for genetic flexibility. CIP breeder Walter Amoros explained that potato clones were used, those particular strains meant to survive in high-salinity soil with very little water. The clones were originally developed to be grown in Peru's Pampas de La Joya salt desert, said to be the most Martian-like biome on Earth.

For the Martian potato experiment, CIP gathered Pamas de La Joya soil and mixed it with fertilized Earth soil. "It was a pleasant surprise to see that potatoes we've bred to tolerate abiotic stress were able to produce tubers in this soil," Amoros said, adding that CIP sold a similar strain of potato to Bangladesh, who cultivated it in high-salinity coastal soils.

"Growing crops under Mars-like conditions is an important phase of this experiment," said Julio Valdivia-Silva, an ARC research associate. "If the crops can tolerate the extreme conditions that we are exposing them to in our CubeSat, they have a good chance to grow on Mars."

China Plans to Launch 1st Probe to Mars in Summer 2020

In the 2015 film The Martian, astronaut Mark Watney (Matt Damon) is accidentally stranded on Mars with little food. To keep himself alive, Watney grows potatoes by mixing feces with Martian soil. "They say once you grow crops somewhere, you have officially colonized it. So, technically, I colonized Mars. In your face, Neil Armstrong!" the character declares in one of the movie's most memorable quotes.

Andy Weir, author of the science fiction novel on which The Martian was based, researched extensively to make the story as scientifically accurate as possible. "Well, they've known for a while that crops can grow in Martian soil," he told Engadget on Wednesday. "It's just a matter of cleaning the perchlorates out of the soil, and providing an Earth-like environment (air, water, temperature, etc.)."

Perchlorates, acidic salts used in rocket fuel and fireworks, are most commonly found in salt deserts. Chemical analysis revealed a large amount of perchlorates present in Martian soil, about 100,000 times that of typical Earth soil. As perchlorates are toxic to humans, Martian-grown food would be rendered inedible.

The CIP experiment uses soil with elevated perchlorate levels, but not quite at the levels of Martian soils. It should be possible for human colonists to grow these hardy potato plants by mixing Martian soil with dirt brought from home.

The research is promising, and soon may prove Mark Watney right. Mars will come to fear our botany powers.

000000
Popular comments
"they have successfully grown potatoes in a hermetically-sealed orbital environment that simulates conditions on Mars" Between a simulation, and reality, there is a huge gap. The soil they used was not Martian soil, on planet Mars, under Martian conditions...