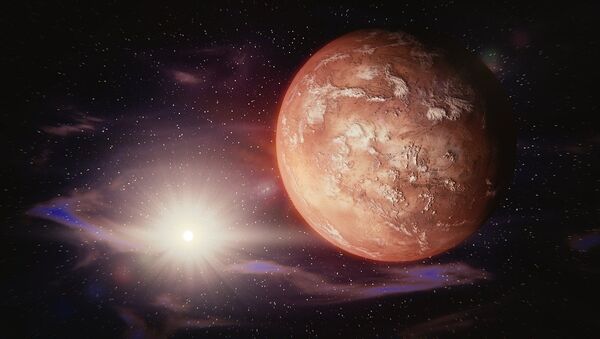 © Photo : Pixabay
Subscribe
The colonization of Mars has been the fantasy of sci-fi writers and scientists alike for perhaps a century or more. Now, these dreams are a step closer to becoming reality, under radical plans unveiled by NASA that would see a magnetic field being used to reduce radiation levels, one of the primary barriers to human exploration of the planet.

The reasons for Mars' mesmeric hold on the human imagination are obvious. Its surface conditions make it the most hospitable planet for humans in the Solar System bar Earth. The planet is similar to Earth in many ways, too — a Martian day is 24 hours, 39 minutes and 35.244 seconds, Mars' surface area is 28.4% of Earth's (only slightly less than the amount of dry land on Earth), and the planet's similar axial tilt means it has seasons much like Earth's — although they are nearly twice as long, as a Martian year is about 1.88 Earth years. 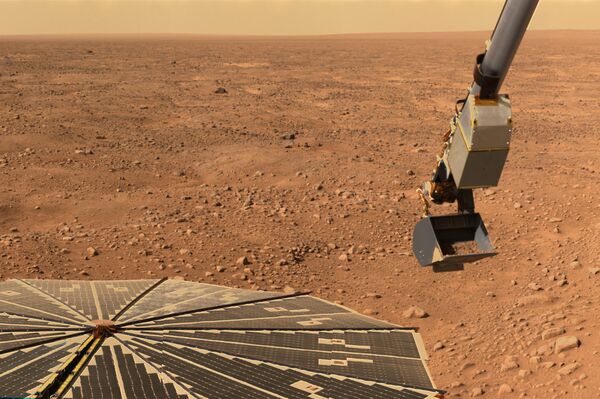 This NASA handout image, released on June 13, 2008 shows the Robotic Arm on NASA's Phoenix Mars Lander with a sample of martian soil as it prepares to move to the spacecraft's microscope station.
© AFP 2021 / NASA

As technology has advanced, and anxieties about the future prospects for humanity on Earth have increased, the race for space colonization has gained momentum. Many astronomers, scientists and businesses have for years worked to see if colonization missions to the planet would ever succeed. Despite its similarities to Earth, the planet is still inimical to human life, with sub-Antarctic temperatures all year round, an atmosphere is composed of roughly 95 percent carbon dioxide, 0.13 percent oxygen, and minor traces of water, nitrogen oxide, neon, hydrogen-deuterium-oxygen, krypton, and xenon.

Frozen water almost certainly exists under the surface, which could be an invaluable resource for colonies — although visitors would still have to live with high levels of radiation, as well as constant, violent iron dust storms.

Tune in to the Planetary Science: Vision 2050 workshop LIVE at: https://t.co/h2RyVJjaD3 https://t.co/i9PIhPxDXZ

However, NASA has outlined a way of making Mars much more habitable — and in the process taken a significant step towards allowing human exploration of the planet. Presented at the Planetary Science Vision 2050 Workshop, the proposal would see the deployment of a magnetic shield around the planet that could act as a barrier to radiation, and reduce the need for extreme protective equipment. It relies on the theory that over four billion years ago, the planet's magnetic field suddenly vanished — over the course of the next 500 million years, Mars mutated from a warmer, wetter environment to the cold, uninhabitable husk seen today.

Without returning some kind of magnetic field to Mars, this situation will not change, and indeed could worsen. NASA Planetary Science Division Director Dr. Jim Green said that by placing a magnetic dipole shield at the Mars L1 Lagrange Point, a man-made magnetosphere could cradle the entire planet.

The team says previous tests in lab conditions suggest inflatable structures could generate a magnetic dipole field at a level of perhaps one or two Tesla, protecting against both radiation and solar winds. Such a field could even result in Mars' atmosphere thickening over time, creating a greenhouse effect, which would increase the planet's surface temperature by up to four degrees, and melt northern polar ice caps — restoring Mars' oceans in the process.

These improved conditions, Dr. Green argued, would allow for human explorers to study the planet in much greater detail, and help determine its habitability, since many of the elements that pointed towards Mars being habitable in the past would slowly seep back into and onto the planet's environment.

Those eager to buy their ticket to a liveable Mars may have to be patient. Dr. Ruth Bamford from Rutherford Appleton Laboratory and Oxford University, who attended the Workshop, acknowledges the idea sounds "fanciful" — the proposal formed part of a "thought experiment" in any event. Although, she adds that the underlying physics are "entirely sound."

"We're trying to inspire people to imagine what we would need to do to colonize Mars. We're seeing how computer simulations can cope with a challenge beyond their usual abilities to perform. We will need to conduct extensive computer simulations, and constantly refine them, to produce accurate assessments of how long the changes would take — and how much the project would cost. It will be immensely expensive, a huge investment. Although if we as a species plan to inhabit Mars, we need to dedicate vast resources to that project anyway," Dr. Bamford told Sputnik.

By the time mankind launch the magnetic field — which won't happen before 2050 at least — humans will, Dr. Bamford suggests, already be visiting Mars regularly, with crews establishing infrastructure and building colonies. There'll be large vessels traveling between the two planets, and scientists could assemble the field in transit.

"We're developing fusion on Earth, which means a lot of things will change in the next 20-30 years. The possibility of such projects will become much more credible. If you look backwards, 50 years ago, people's imaginations were leaping, and coming up with what we see today. Mars is a place we can envisage humanity living on. It'll never be quite like Earth, but it's the planet we'd most likely be able to live on," Dr. Bamford concluded.

000000
Popular comments
I welcome our wealthy globalist overlords migrating to Mars and wish them well on their rapid evolution of the species.

AnomicDust
7 March 2017, 19:21 GMT
000000
First, spend the money on the Artic, Sahara or Antartica. Life extinc Mars is not better than the Artic.
enrique_costas
8 March 2017, 04:45 GMT
000000
Newsfeed
0
New firstOld first
loader
LIVE
Заголовок открываемого материала
Access to the chat has been blocked for violating the rules . You will be able to participate again through:∞. If you do not agree with the blocking, please use the feedback form
The discussion is closed. You can participate in the discussion within 24 hours after the publication of the article.
To participate in the discussion
log in or register
loader
Chats
Заголовок открываемого материала
Worldwide
InternationalEnglishEnglishMundoEspañolSpanish
Europe
DeutschlandDeutschGermanFranceFrançaisFrenchΕλλάδαΕλληνικάGreekItaliaItalianoItalianČeská republikaČeštinaCzechPolskaPolskiPolishСрбиjаСрпскиSerbianLatvijaLatviešuLatvianLietuvaLietuviųLithuanianMoldovaMoldoveneascăMoldavianБеларусьБеларускiBelarusian
Transcaucasia
ԱրմենիաՀայերենArmenianАҧсныАҧсышәалаAbkhazХуссар ИрыстонИронауОssetianსაქართველოქართულიGeorgianAzərbaycanАzərbaycancaAzerbaijani
Middle East
Sputnik عربيArabicArabicTürkiyeTürkçeTurkishSputnik ایرانPersianPersianSputnik افغانستانDariDari
Central Asia
ҚазақстанҚазақ тіліKazakhКыргызстанКыргызчаKyrgyzOʻzbekistonЎзбекчаUzbekТоҷикистонТоҷикӣTajik
East & Southeast Asia
Việt NamTiếng ViệtVietnamese日本日本語Japanese中国中文Chinese
South America
BrasilPortuguêsPortuguese
NewsfeedBreaking
15:44 GMTIsrael Will Reportedly Push US to Strike Iranian Facility Amid Lack of Progress in Vienna Talks
15:41 GMTAmerica Unveils First-Ever Strategy to Battle Corruption at Home and Abroad
15:30 GMTChina May Build Military Base in Equatorial Guinea Amid Beijing’s Tensions With Washington
15:15 GMTKremlin: Putin Will Listen to Biden's Proposals on Ukraine 'With Great Interest'
15:15 GMTNYC to Use 'Preemptive Strike' Against Omicron With Vaccine Mandate for all Businesses, Mayor Says
15:08 GMT3,000 Security Officers Guard India's Mathura as Hindu Group Threatens to Install Idol in Mosque
14:59 GMTAmid Rumours of US Boycott of Beijing Olympics, How Could the Move Affect the Games?
14:52 GMTUK Policing Minister Not Surprised Over Reports of Drug Use in Parliament Building
14:45 GMTLabour Unions Protest in Brussels Against Low Wages, Expensive Electricity - Photos
14:26 GMTSpanish Court Rules Employee Can be Fired for Job Abandonment During Pandemic - Reports
14:18 GMTAnger and Shock After Intruders Vomit and Urinate at Site of Manchester Arena Bombing Memorial
14:15 GMTUS, UK, Canada Concerned by Tigrayans Arrested Without Charge in Ethiopia
14:07 GMTLionel Messi, Neymar or Himself: Kylian Mbappe Reveals Who's 'Boss' at Paris Saint-Germain
13:58 GMTFormer Indian Shia Leader Embraces Hinduism After 'Death Threats From Muslim Groups'
13:48 GMTMarine Le Pen Accuses EU of 'Playing Role of Firefighter-Pyromaniac' in Ukraine-Russia Tensions
13:47 GMT'Happy a Team Like Barcelona is Interested in Me', Says Salah Amid Liverpool Contract Impasse
13:30 GMTEarth is Getting Its Own Black Box That Will Tell What Caused Humanity's Demise
12:58 GMTChina Says Plots to Thwart Ties With Solomon Islands 'Doomed' as PM Survives No-Confidence Vote
12:53 GMTPutin in Meeting With Modi, Discusses Drug-Trafficking, Terrorism and Situation in Afghanistan
12:46 GMTSri Lanka Demands Compensation From Pakistan Over Brutal Mob Killing of Factory Manager