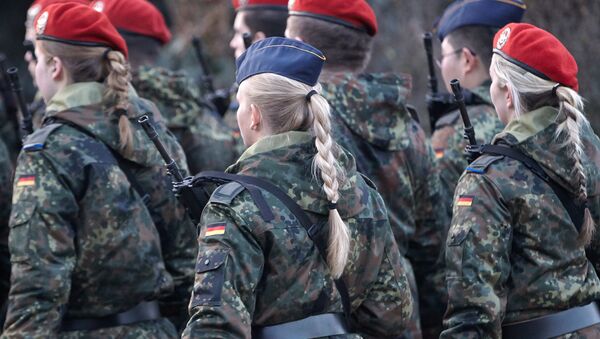 © AFP 2021 / THOMAS FREY / DPA
Subscribe
An investigation has found female soldiers have been systematically forced to perform humiliating strip and pole dancing shows for officers at an army base in Germany, as part of their "initiation" into the military.

The investigation into abuses at Pfullendorf military base was conducted by the German Armed Forces, the Bundeswehr. It concluded that "sexual abuse and sadistic actions were common practice" in the base's training course, Combat First Responder.

An anonymous recruit, Nicole E, recounts instructors at the base repeatedly compelling her to endure embarrassing "recruitment tests" involving pole dancing in the barracks. Spectators often took pictures of these events, claiming the photos were part of the training. Supervisors tasked with monitoring the activities at the base apparently regarded these situations as "absolutely normal," and some even took part.

Violent, Ruthless, Merciless Hazing in the US Air Force

A pole of the sort typically seen in strip clubs was found to have been installed in the middle of one of the barracks, with female recruits frequently pressured into performing dance routines, the military inspectors found. Investigators also discovered a shelf full of opened Schnapps bottles in the room, concluding the abusers drank alcohol while the "shows" went on.

During "training sessions" at the base, female recruits were forced to strip naked, and then touched by higher-ups in "intimate" areas without wearing gloves. "Smell tests" were also performed on the recruits.

While much of the abuse focused on female recruits, male soldiers in training did not escape the abusers' attentions, and were forced to take part in "absolutely senseless and apparently sexually motivated medical exercises" that involved soldiers inserting roller bandages into their anuses.

In an almost ironic twist, the victims' accounts were largely confirmed as the abusers forced them to fill out "consent forms" to protect themselves from accusations.

The damning report said the situation at Pfullendorf demonstrated "a grave lack of management, training, education and duty supervision." Dealing with the issue effectively would involve a "radical mindset shift" of every member of personnel serving at the base. However, five trainers accused of abuses, including a major, were simply reassigned to other positions at the base or sent to other military facilities. Some were reportedly even offered elite posts within the armed forces.

This is not the first time the Bundeswehr has become embroiled in a major controversy. Several cases of violence were documented in an army unit in North Rhine-Westphalia in 2004. During hostage release training, trainees were tied up and beaten in a simulated interrogation. Instructors who carried out the assaults were convicted and sentenced to prison terms, although the terms were suspended.

In 2006, a number of junior officers at a base in Niderauerbach were subjected to humiliation and sexual harassment, forced to undress and stand naked while superiors taunted them.

In 2009, a German colonel ordered airstrikes on fuel trucks in Afghanistan, resulting in the deaths of 142 Afghans. He was found to have violated NATO rules, giving the order without accurate analysis of the situation. Also in Afghanistan, German soldiers took photos of themselves posing with the skull of a dead local. In one photo, a soldier held his bare penis with one hand and the skull with the other.