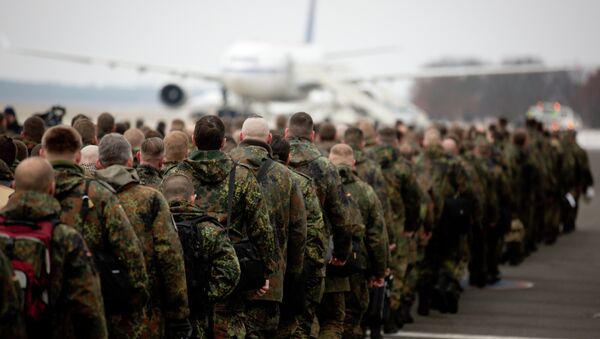 The Bundeswehr made headlines in Western media following the recent scandal over the use of violence among its soldiers. It was reported that army recruits of an elite military unit in Pfullendorf, Baden-Württemberg, repeatedly were subjected to humiliation and sexual abuse by other officers who had served there for a longer period of time.

However, this is not the first when the Bundeswehr had been publicly criticized for inappropriate actions. Below are the seven most sensational scandals surrounding the German Army.

According to media reports, in 2006 a number of junior officers in Niderauerbach were subjected to humiliation and sexual harassment by their "comrades" who forced them to undress and stay naked while they taunted them. Two years later, a captain, who knew about this practice, but kept silence, was fined 2,000 euro.

According to German Der Spiegel magazine, several cases of violence were registered in an army unit in North Rhine-Westphalia in 2004. In the course of the training on how to release hostages, the officers were tied up and beaten during an imaginary "interrogation." Later, several instructors were convicted and sentenced to suspended prison terms.

An outrageous incident was reported by German Die Zeit newspaper, where a group of Bundeswehr soldiers made dirty jokes about a skull of a murdered man in Afghanistan. In a picture, one of the soldiers proudly held a skull with his right hand. In another photo, another soldier was holding his bare penis with one hand and the skull nearby with another. The incident prompted an investigation against 20 Bundeswehr soldiers.

In 2012, the G36 assault rifle that had been part of the standard equipment of German soldiers since 1996, revealed a number of serious shortcomings. It became known that the rifle tends to heat up during continuous fire and becomes incapable of hitting targets past 200-300 meters. In March 2015, the defects were confirmed by German Defense Minister Ursula von der Lyayen. All 170,000 weapons have since been replaced.

In October 2016, German authorities had to give up the idea of using their Tornado reconnaissance aircraft in operations in Syria and Iraq due to a number of defects. According to the German Das Bild newspaper, the decision in particular concerned six aircraft deployed to the NATO's Incirlik airbase in Turkey.

6. "Combat helmet and a black bolt"

It turned out that problems may occur even with such simple items like a combat helmet. The standard M92 kevlar model was designed to protect soldiers from shrapnel grenades, but it turned out, that one small black bolt holding the frame together was not strong enough. For this reason, the helmets have been allowed for use only in Germany. Defective bolts are expected to be gradually replaced by more durable ones.

7. Violation of NATO rules and almost 150 victims as result

In 2009, a Bundeswehr colonel ordered airstrikes on several fuel trucks in Afghanistan. He was later accused of violating NATO rules as he gave the order without an accurate analysis of the situation. As a result, he was responsible for a total of 142 deaths.