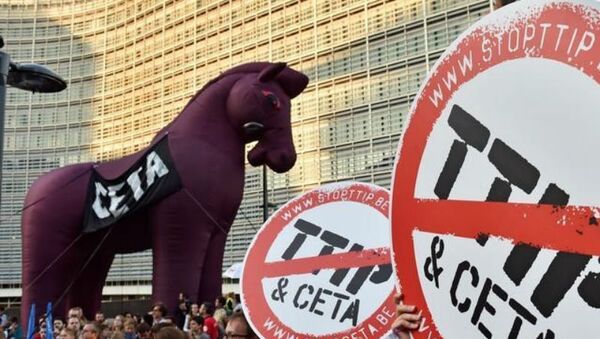 The CETA deal is intended to remove customs duties, end restrictions on access to public contracts and open-up the services markets between Canada and the 28 EU member states. Although it was formally signed by the European Council and Canada on October 30, 2016, it still requires the assent of the Parliament as well as the member states' national parliaments.

​The Greens/EFA group has published its resolution to the next parliament, which will be voting on February 15, detailing its objections. Principally it says the dispute resolution system, under CETA, will undermine European democracy.

Opposition to the system is also at the center of arguments over two other trade deals — including the Transatlantic Trade and Investment Partnership (TTIP) between the EU and the US and the Trade in Services Agreement (TiSA) between 23 members of the World Trade Organization and the EU.

"#CETA in your town": our new interactive map & data tool gives snapshot of exports to Canada 🇨🇦 from across the EU https://t.co/qfdSl8gXm0 pic.twitter.com/K3xGdXvC9h

All three trade deals involve the controversial Investor State Dispute Settlement (ISDS) provisions, in some shape or form. In CETA, it is the ICS — Investment Court System. For a trade deal to work, there have to be common standards on labor, environmental issues, food safety and many other issues.

Once an agreement is in place, if a company is able to sell its products in its home territory, but is prevented from selling it in a partner country — because of conflicting regulatory conditions — then the company may invoke the ISDS provisions taking the matter to a trade tribunal.

"CETA may undermine European democracy. It allows claims to be made only by foreign investors, is based on extremely broad foreign investor rights, and abrogates from the basic international law principle of prior exhaustion of domestic legal remedies. Greens are against such an unnecessary parallel system of justice which prioritizes private foreign investment over domestic public interest," the resolution says.

The CETA deal nearly fell down days ahead of the official signing in October 2016 when, in Belgium, the Wallonian parliament — one of the regional assemblies that had to give the go-ahead to the deal for the federal government to sign up to it — opposed it on labor, consumer and environmental grounds.

CETA may also fall victim to US President Donald Trump's antipathy towards multi-trade deals, such as the North American Free Trade Agreement (NAFTA) which he says he is going to rethink, putting the TTIP deal — which the EU and the US have been negotiating for years — into doubt.