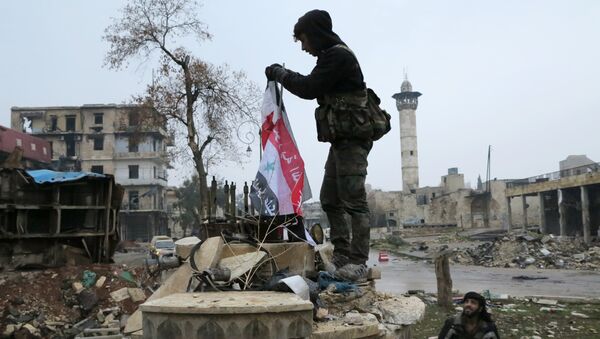 Representatives of Russia, Turkey and Iran have agreed to separate opposition units from terror groups on the map during the Syria peace talks in Kazakhstan; this can be called a certain breakthrough, Russian expert Boris Dolgov told RIA Novosti.

Turkey and Syria: How Bad Neighbors are Finding Unity in Fight Against Daesh
In an interview with RIA Novosti, Boris Dolgov of Moscow-based Institute for Oriental Studies heaped praise on the results of the recent peace talks on Syria in the Kazakh capital Astana between representatives of Russia, Turkey and Iran.

The interview came after Major General Stanislav Gadzhimagomedov, head of the Russian delegation, said that during the Astana talks' first session, the sides "almost completely agreed upon the draft position of the joint group to monitor compliance with the cessation of hostilities [in Syria]."

"I think that at the next meeting we will sign the document," Gadzhimagomedov said, while a source in one of the delegations in Astana told Sputnik that the mechanism was 90 percent complete.

He also pointed out that Russia had proposed two additional documents on the control of the ceasefire arrangement in Syria.

The first paper is a protocol on the ceasefire, which specifies that the government must cease hostilities and holds the parties responsible for providing humanitarian access and exchanging detainees.

The second document is a statute on the reconciled settlement that is designed to stabilize the situation in besieged areas as soon as possible.
During the Astana talks, participants also focused on separating moderate opposition units form terrorist groups on the Syrian map.

Russian, Iranian, Turkish Mechanism on Monitoring Syria Ceasefire 90% Complete
Commenting on this, Boris Dolgov praised the results of the talks which he said were of a "technical nature" and which proved its value in terms of separating moderate opposition groups from terrorists.

"The very act of doing so is a positive thing, although we should bear in mind that the main problem is fighting against armed radical opposition and terrorist groups," he said.

"In a sense, separating opposition group from terrorists is certainly a breakthrough. But we must understand that armed groups are semi-guerrilla units which contact with each other, and such contacts can take place between the moderate opposition and terrorist groups. So separating them fully is a very complex question which is yet to be resolved," he said.

Dolgov was echoed by Milos Strugar, the representative of the United Nations Interim Force in Lebanon, who applauded the results of the Astana talks on coordinating a mechanism to monitor the ceasefire in Syria.

"Of course, it is successful," he said in an interview with RIA Novosti, referring to the talks' session which wrapped up on Monday. Strugar declined to elaborate, citing the fact that the UN is not a full-fledged participant in the negotiations.

Differentiating between terrorist extremist groups and other anti-government factions has been a problem that’s continually plagued outside attempts to resolve the conflict, even among the opposition's foreign sponsors.

Lavrov: Syria ceasefire deal open to all but #ISIS and Al-Nusra https://t.co/QuRxUCaNP2

According to the US National Counterterrorism Center, "several Syria-based armed opposition groups cooperate and fight alongside Sunni extremist groups, including al-Nusra Front, and are dependent upon them for expertise, training, and weapons."

How Humanitarian Crisis Became 'a Tool to Undermine Syria's Sovereignty'
Since 2011, Syria has been engulfed in civil war, with government forces fighting against numerous opposition and terrorist groups such as the al-Nusra Front and Daesh.

Russian President Vladimir Putin announced in December 2016 that the Syrian government and armed opposition groups had reached an agreement on a nationwide ceasefire in Syria and on readiness to start peace talks.