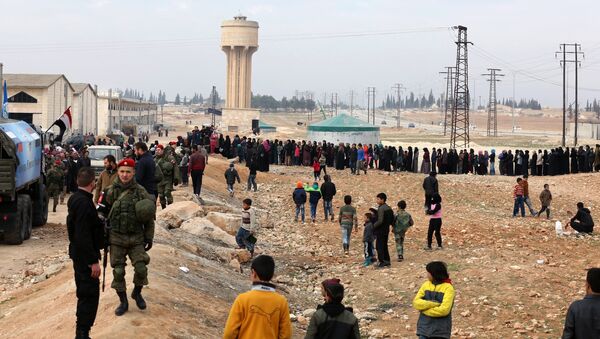 Stanislav Gadzhimagomedov, the head of the Russian delegation stated that Russia proposed two documents on control over the ceasefire regime in Syria.

MOSCOW (Sputnik) – The joint task force (JTF) regime almost adjusted the mechanism on monitoring the ceasefire in Syria during its first session that took place in the Kazakhstan’s capital of Astana on Monday.

"During the first meeting, we almost completely agreed the draft position of the joint group to monitor compliance with the cessation of hostilities. Some details should be agreed in the capital. I think that at the next meeting we will sign the document," Stanislav Gadzhimagomedov, the head of the Russian delegation, said, while a source in one of the delegations in Astana told Sputnik that the mechanism was 90 percent complete.

Russia, Iran, Turkey Reiterate Willingness to Cooperate on Syria Ceasefire
Gadzhimagomedov also pointed out that Russia proposed two documents on control over the ceasefire regime. The first paper is a protocol to the ceasefire agreement focusing on conditions for the regime of cessation of hostilities as well as the parties’ responsibilities to ensure humanitarian access and to exchange of forcibly held persons. The second one is a statute on the reconciled settlement that is designed to stabilize situation in besieged areas as soon as possible.

"These documents are complicated and, of course, need to be adjusted by both Syrian government and opposition," Gadzhimagomedov said.

He also expressed a hope that the next JTF session would elaborate on the proposed papers.

Participants of the JTF session also discussed observation of the ceasefire regime in Syria.

"The participants of the meeting discussed the progress of implementation of cessation of hostilities in Syria, special measures to establish an effective monitoring mechanism and control … The participants also discussed the measures of mutual confidence and ensuring unimpeded humanitarian access," Gadzhimagomedov said.

Russia-Iran Cooperation in Syria Continues With the Same Pace - Iranian MoD
He pointed out that the number of ceasefire violations was decreasing.

"The violations still occur, but their number has decreased significantly, and we agreed to continue work on this issue to stop these violations and provocations completely," the Russian delegation’s head said.

Gadzhimagomedov added that Jordan’s representatives had reported southern Syrian opposition units were ready to join the ceasefire regime and to fight against terror groups such the Daesh and Jabhat Fatah al Sham (formerly known as the Nusra Front), both outlawed in Russia and a number of other states.

During the session its participants were working on separating opposition units form terror groups on the map.

The work on separating opposition units from terrorists will continue, according to the head of the Russian delegation.

According to Gadzhimagomedov, parties to the talks did not discuss the issue of the future Syrian constitution.

"The constitution was not discussed. Experts focused primarily on the development of mechanisms to monitor compliance with the regime of cessation of hostilities," he said.

Russia Registers Eight Ceasefire Violations in Syria in Past 24 Hours
The head of the Russian delegation added that the Syrian government was proposed to create working groups for preparing the draft constitution, which could later become a basis for the constitutional commission that will end the work and create mechanism of the constitution’s adoption.

The JTF first session lasted for about six hours. Along with experts from Russia, Iran and Turkey, their colleagues from the United Nations and Jordan also joined the session. The next JTF session is scheduled for February 15-16 – before the next round of Geneva talks on the Syrian peace settlement.