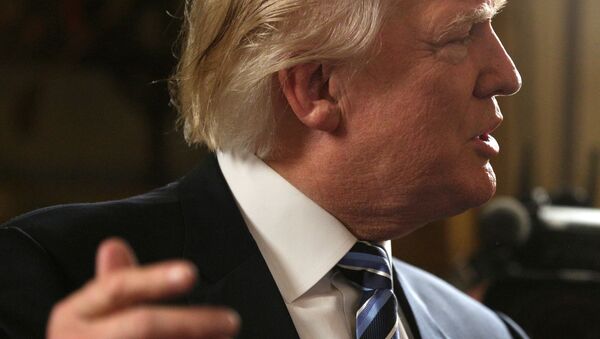 © REUTERS / Joshua Roberts
Subscribe
International
India
Africa
Iran is the "number one terrorist state," the United States will work with Tehran from the position of sanctions, US president Donald Trump said late on Sunday.

MOSCOW (Sputnik) — In his interview with the Fox News channel, Trump said that Tehran "total disregard" for Washington in its activities.

He promised that the United States will act from the position of sanctions against Iran, explaining that "we’ve just started" doing it.

New Anti-Iran Sanctions May Result in 'Unwanted, Dangerous' Mideast Crisis
On Friday, the United States introduced a new round of sanctions against Tehran for conducting a ballistic missile test on January 29. The US Treasury Department sanctioned 25 entities and individuals.

After the move Iran announced it believes the sanctions imposed on them by the White House were "illegal," and that in retaliation they would be imposing legal restrictions on American individuals and entities that are assisting "regional terrorist groups", the Foreign Ministry said in a statement.

Following the announcement, US National Security Advisor Michael Flynn hit back, saying that the days of turning "a blind eye to Iran's hostile and belligerent actions are over."

Commenting on the possible new sanctions, Trump said that he would not warn of his actions regarding Iran in advance, saying that he criticized president Obama for announcing his military actions against Daesh, a terrorist group banned in Russia and other countries, or against other terrorist groups.

"They give the name, the date, the time. I don't believe in that," Trump said.