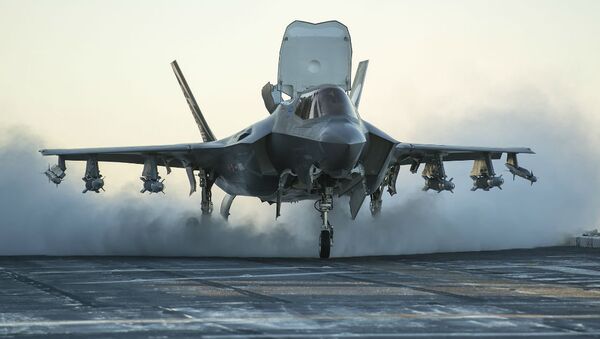 "We cut approximately $600 million off the F-35 fighter," US President Donald Trump said Monday at the White House, adding that it “only amounts to 90 planes,” referring to the tenth and largest order of the costly jets.

"I think it was a great achievement," Trump said. "But that really means much more than that if you think about the fact that that’s 90 planes out of close to 3,000 planes that are being ordered." Trump commended Lockheed Martin and its CEO, Marillyn Hewson, "for being so responsive" in reducing the costs, adding that the US government will save "billions, and billions, and billions, of dollars."

After seven years of cost overruns, "we’ve really, really got that program in good shape," he said. It marked a 180-degree reversal from a news conference earlier in January in which Trump blasted the F-35 program as "way, way behind schedule and many, many billions of dollars over budget," especially since he has only been President for ten days.

Trump said there has been “no movement” between the Pentagon and Lockheed Martin on negotiations for the terms for the tenth order, but that assertion fails to corroborate with publicly-known facts. The Pentagon fronted Lockheed Martin over $1.28 billion in November 2016 for production of the planes in a deal that is been valued between $7 and $9 billion, Sputnik reported. The ninth order ran about $6.1 billion for 57 F-35s.

As "fake news" has emerged as a national and global frenzy, it is important for reporters to verify and corroborate claims touted as facts. For Lockheed Martin’s part, they did not indicate how these cost savings were realized. Instead, the weapons manufacturer posted a boilerplate statement thanking the President for his "comments this morning on the positive progress we’ve made on the F-35 program. We share his commitment to delivering this critical capability for our men and women in uniform at the lowest possible cost to taxpayers."

What the statement does not address is that Lockheed Martin is not willing to reduce the burden on taxpayers in a way that would interfere with the company’s bottom-line. Hewson reassured investors and shareholders in a recent earnings call that lower F-35 prices would not cause the "slashing our profit." Hewson noted that selling the joint strike fighter abroad where there is "growing international demand" made the F-35 a "growth engine" for the company's financials.

One wonders if Hewson’s supposed agreement to sell the F-35s cheaper in the US came with a pledge to allow Lockheed Martin to ship more F-35s overseas. "What’s happening with Lockheed, number one we’re cutting the price of their planes by a lot but they’re also expanding and that’s going to be a good thing. Ultimately they’re going to be better off," Trump announced from the Oval Office.

But Trump’s claims to more than half-a-billion in cost-savings arrives with no mention of how much the deal for 90 F-35s is worth. Given that negotiations are ongoing, and that the deal valuation estimates are approximately $2 billion apart, it is difficult to state with accuracy whether Trump actually reduced the F-35 price. The price per jet for the tenth order would need to be known for that calculation but it remains undisclosed.

To save $600 million on 90 jets, the cost would have to be reduced by about $6.6 million per jet. This 6-7 percent reduction would be roughly in line with Lt. Gen. Christopher Bogdan’s December 2016 estimate to reduce the price by precisely that percentage. Trump’s reported savings are exactly what Bogdan had previously estimated.

There are a couple of reasons to be critical of Trump’s claim. Not only was the deal size not announced, but economies of scale imply that as more F-35s are produced, they become cheaper to produce. The aircraft’s anti-missile systems producer said lower F-35 costs were "a given, regardless of Trump." Further, it’s hard to see where Lockheed Martin can claim leverage in negotiations with the government, given that the US funded up-front research and development for the F-35’s cutting-edge technologies and intellectual property. According to 2015 data, Congress authorized $55 billion for the development phase alone.