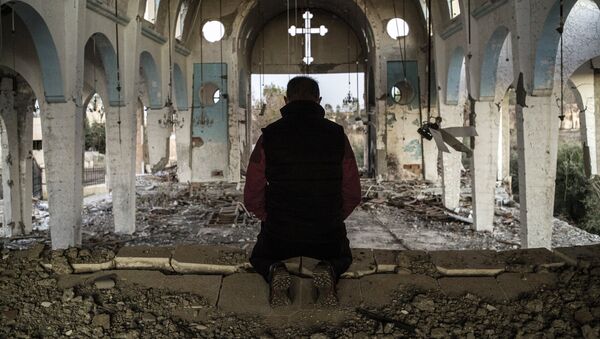 Alexander Mercouris
London-based lawyer
All materials
US President Donald Trump continues the blizzard of activity with which he has begun his Presidency with pronouncements that the practice known as 'waterboarding' works, and that he wants to see 'safe zones' established for refugees within Syria.

WaPo Strikes Again: Reinstating CIA ‘Black Sites’ Was Fake News
In the case of "waterboarding" and other practices euphemistically referred to by the CIA as "enhanced interrogation techniques" President Trump says that despite his own opinions he will defer to those of his military and intelligence chiefs.

In the case of his proposal for "safe zones" President Trump is however — according to media reports — asking his military and intelligence chiefs to return with proposals in 80 days to set them up.

President Trump is wrong on both these issues.

"Waterboarding" and "enhanced interrogation techniques" are quite simply forms of torture, and that apart from a small number of marginalised dissidents is now the consensus view amongst jurists.

Torture is an immoral and despicable practice. It is also illegal.

In light of this to debate whether or not it "works" is a fallacy. By way of illustration, dropping a nuclear bomb on ISIS [Daesh] might "work". No one in their senses proposes it.

CIA Director Nominee Pompeo Would Not Order Use of Torture in Interrogations
As it happens whether torture "works" in the way President Trump and some people in the CIA appear to think is debatable. Whatever intelligence the US actually obtained by torture when it was in use during the period of the George W. Bush administration — the value of which has anyway been widely questioned — it did not result in the US breaking or defeating Al-Qaeda. On the contrary Al-Qaeda was stronger and more popular amongst disaffected Muslims at the end of the Bush administration than it had been at its start.

During their confirmation hearings before the Senate President Trump's nominees for the posts of Defence Secretary and CIA Director — General Mattis and Mike Pompeo — said they would not reintroduce torture. In General Mattis's case, it seems he opposes torture in principle. President Trump should heed his advice.

Why Trump's Plan to Build 'Safe Zones' in Syria Could Backfire at US
On the question of "safe zones", this proposal was advanced during the era of the Obama administration's policy of achieving regime change in Syria. Though some of its advocates liked to claim that the "safe zones" were intended to protect civilians, in reality they were obviously intended as US protected base areas for the US-backed Jihadi fighters who were fighting to overthrow the Syrian government.

President Trump says that his administration will no longer continue with this regime change policy. Unlike earlier advocates of "safe zones" he does genuinely seem to want to establish them in order to protect civilians.

If so, then this proposal is doubly misconceived.

Firstly, if the US does commit itself to setting up "safe zones" inside Syria, then as night follows day the US supporters of regime change in Syria — who remain influential in the US despite the change of administration — will try to use them for their original purpose: as US protected base areas for US backed Jihadi fighters seeking to overthrow the Syrian government.

The US would find itself drawn into the Syrian conflict in order to achieve regime change in Syria, which is the opposite of what President Trump says he wants.

Secondly, as regards the question of refugee flows from Syria, President Trump and Western commentators may not have noticed the fact, but this was last year's problem, not the problem now.

Buffer Zone for Refugees Should Be Created in Border Areas of Syria
In 2015 and 2016 — and indeed in previous years — fighting in Syria was intense, causing millions of refugees to flee Syria in order to escape the fighting.

Today the Syrian government has consolidated itself, re-establishing its control over the key cities of Damascus and Aleppo, and in Syria's populous coastal hinterland which lies between them.

There is a Russian-Turkish brokered ceasefire in place, which is being generally observed, and the conditions of life for most Syrians are now far more secure and peaceful than they have been in years.

Astana Talks on Syria Are 'a Step Toward Decent Peaceful Solution'
If President Trump genuinely wants to end refugee flows from Syria, then he should act to support this process, which has already reduced refugee flows substantially, by backing the ceasefire and the peace talks in Astana. By contrast trying to create "safe zones" in Syria — especially when they are no longer needed — can only upset and destabilize this process, which would most likely cause the flow of refugees to resume.

It is to be hoped that President Trump's advisers will explain this to him, as will doubtless the Russian government when he finally begins talking to it.