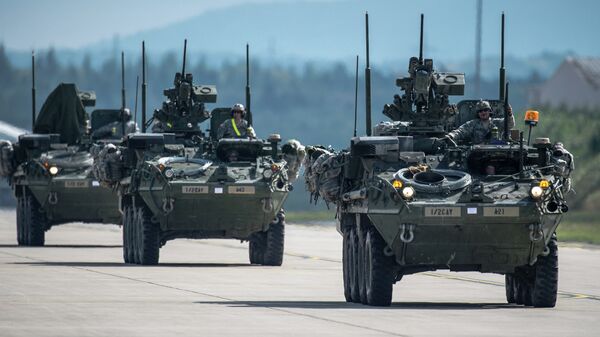 US Stryker Carrier Outgunned by Russian Armored Vehicles
WASHINGTON (Sputnik) — Stryker combat vehicles equipped with upgraded a 30mm cannons have been completed, allowing US soldiers in Germany to begin training for the vehicle’s 2018 deployment in Europe, the US Army said in a press release.

"This summer, soldiers with the 2nd Cavalry Regiment out of Vilseck, Germany, will get in-depth training with the new Stryker," before becoming "the first Army unit to receive them," the release stated on Wednesday.

Upgraded Russian combat vehicles observed in Ukraine in 2015 prompted the US Army to begin revamping its own Stryker fleet, the release explained.

The 30mm cannon is best known for its use on the A-10 Thunderbolt II "tank-killer" aircraft. The weapon will be placed on some, but not all, future Stryker vehicles to increase lethality, the release noted.

Tests on prototype Stryker vehicles with the larger cannon were completed late last week at Aberdeen Proving Ground in the US state of Maryland, according to the release.