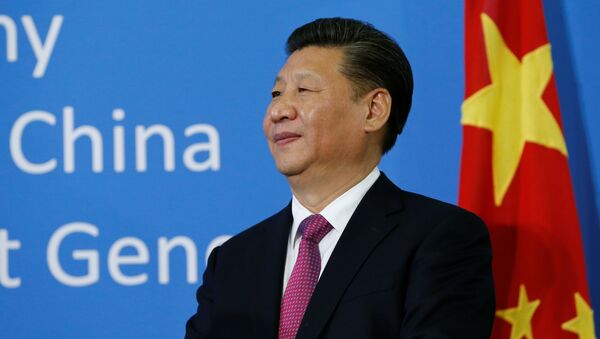 © REUTERS / Denis Balibouse
Subscribe
International
India
Africa
Following the decision by the US to withdraw from the Trans-Pacific Partnership (TPP) free trade deal, Asian-Pacific countries have reiterated their desire to continue trade talks with each other, with an economist telling Sputnik that Washington's departure from the agreement looks set to boost China's influence in Asia.

Despite acknowledging that the US withdrawal from the trade deal was a blow, TPP signatory states said they would hope to salvage the deal by luring Asian countries into trade talks.

Australian Prime Minister Malcolm Turnbull was clear on what country could join the agreement to offset the departure of the US.

"Losing the United States from the TPP is a big loss, there is no question about that," Turnbull told reporters in Canberra.

"But we are not about to walk away… certainly there is potential for China to join the TPP."

"The original architecture was to enable other countries to join," he told the Australian Broadcasting Corporation.

"Certainly I know that Indonesia has expressed interest and there would be scope for China if we are able to reformulate it."

Classic @Broelman —but how about Turnbull? Completely bereft of strategy- A total light weight: no plans, no policies, no idea #auspol #TPP pic.twitter.com/dDtDs5uQwn

​Responding to the talk, Chinese Foreign Ministry spokeswoman Hua Chunying did not directly say whether China would be interested in joining the TPP, but welcomed the rhetoric on free trade in the region.

"We think that in the present situation, no matter what happens, all should keep going down the path of open, inclusive, continuous development, seeking cooperation and win-win," Hua Chunying said.

China to Fill US Hole?

The US' departure from the TPP under new President Donald Trump, combined with talk of increased trade with China, has led to suggestions Beijing could significantly expand its influence in the Asia-Pacific region.

Alexander Downer says Indonesia or China could be added to the TPP in the United States' absence.

​"We've got this RCEP agreement with Southeast Asia, which up until now has been on a bit of a slow burn, but we might find the political will for that to pick up if TPP isn't going to proceed," he said.

Hidenobu Tokuda, senior economist at the Japan-based Mizuho Research Institute, echoed the sentiment, telling Sputnik that Trump's decision to pull out of the TPP would result in a shift in influence in the Asia-Pacific region.

​"Beijing would promote the China-led RCEP, and without the TPP, China's influence would expand over the Asian region. And moreover, taking this advantage, China will try to strengthen its interests — and this will be the challenge to the US in the rest of the Asia region," Hidenobu Tokuda told Sputnik.

While the US decision to pull out of the TPP wouldn't result in immediate changes, Tokuda said the move would have "long-term negative impacts on the US itself" as it would "damage future growth potential."

Withdrawing from #TPP abdicates US leadership in #Asia to #China — US can't win if we forfeit opportunity https://t.co/psDxmNaeZ3

"One-on-one deals would be very time consuming and many countries would be reluctant to do that because of Trump's tough negotiation stance," he concluded.