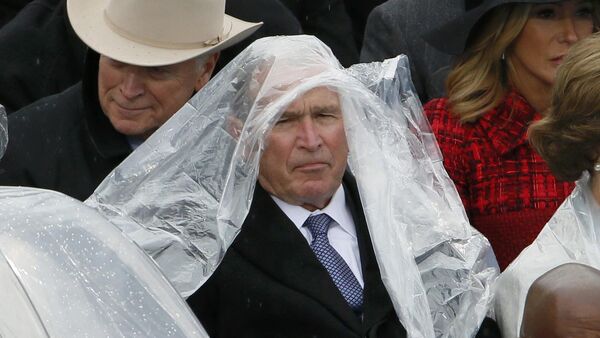 Apart from a bit of rain, Donald Trump's inauguration day ceremony went off pretty much without a hitch. That said, there were more than a few funny moments to be had. Sputnik took a look and compiled some of the best of them here.

On Friday, Donald Trump formally stepped into office as the 45th President of the United States. The inauguration in Washington, DC was attended by an estimated 900,000 people, and watched by tens if not hundreds of millions more, in the US and around the world.

But with all eyes on incoming President Trump and outgoing President Obama, it was former presidents George W. Bush and Bill Clinton who seem to have gotten into the most trouble.

Bush was the first to get attention on social media with what has been described as 'the rain poncho incident', after the former president seemed to have a bit of trouble figuring out how to protect himself from the rain.

Joe Biden memes are great, but have you seen George W. Bush fighting a poncho? 😂😂 pic.twitter.com/NTO3JGM521

George Bush is having an absolute hoot. Can we cut from Trump's speech and just watch Dubya fight with a plastic poncho? #Inauguration

@th3_st0rm @maxwelltani not a great president but man he is funny.

Some Twitter users soon began recalling a series of gaffes from during Bush's presidency, including a famous 2002 incident where he nearly choked to death on a pretzel.

George Bush almost killed himself with a poncho pic.twitter.com/eEekEdCDWs

Former President Bill Clinton became the butt of some jokes himself, after getting busted by his wife Hillary, allegedly for staring at either Ivanka or Melania Trump.

In the video, Clinton can be seen staring into the distance, with Hillary Clinton turning around and looking at him intently for several seconds straight. That incident too soon prompted some jokes on social media.

Some users rushed to defend the former president, telling others that they really had no idea of what Clinton was actually looking at. Others responded, saying that Hillary's stare first at the object of Bill's attention, then back at him, 'proved' that he was ogling something or someone. During the late 1990s, Bill Clinton was involved in an extramarital affair with a young White House intern, prompting a political scandal which led Republican lawmakers to try to impeach him.

News media covering the inauguration also made a few flubs Friday, most famously the BBC, which seems to have accidentally put subtitles from a soap opera over shots of Trump during the swearing in ceremony.

In one shot, the text "Just tell him to get out of my face." appears over Donald Trump with his eyes closed during a prayer. In another, a shot of former President Obama, eyes also shut, appears, with the subtitles "Just shut it, yeah?" and "Oi! Leave him alone!" appearing below.

To be fair, the BBC has said that they have yet to find any evidence of the incorrect subtitles' existence in their broadcasts, but were "looking into whether any localized issues may have affected" those who took screenshots off their televisions.

Finally, in an event that wasn't so much a flub at the inauguration as it was a head-scratching protest event, protesters in Mexico City built a mock wall made out of cardboard boxes outside the US Embassy compound on Friday, complete with an effigy of Trump, which they burned.

Protesters in Mexico City built a wall in front of the US embassy <3 #J20 https://t.co/0BcpEnykfq via @Somoselmedio pic.twitter.com/2xWejlgbBe

Confused by the protest, some Trump supporters on social media reacted by asking whether the cardboard wall was meant as a symbol that Mexico would be building a real wall after all. Mexico's president has said repeatedly that the Mexican government would not be paying for the wall. The border wall had been one of Trump's central pledges on the campaign trail.