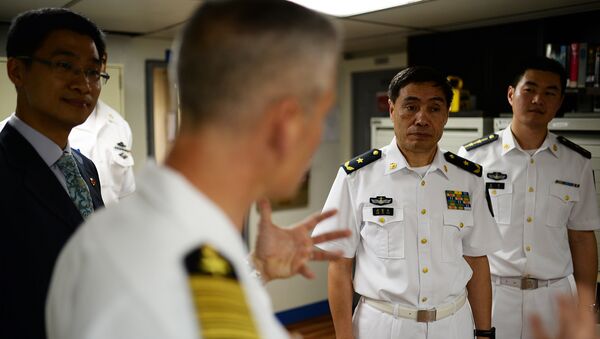 20-Meter Tall Inflatable Trump Rooster New Hit in China
A series of relatively fast promotions brought Shen, who was only 57 years old at the time, to the position of PLAN's commander of the South Sea Fleet — the second most powerful of China's three main fleets — in December 2014.

The fleet, which protects Beijing-claimed assets in the South China Sea, has under its command the CNS Liaoning (CV-16), China's first aircraft carrier, commissioned during Admiral Wu's watch.

The fact that so soon after his 2014 promotion Shen has been appointed to the top job came as a surprise for many, according to Chinese-language Hong Kong daily newspaper Ming Pao. In the past, Admiral Shen served briefly as commander of the support base of the North Sea Fleet, the Navy's Lushun Logistical Base, the Dalian Naval Academy, and the Navy's Command Academy.

Trump to Send China ‘Huge Gift’ by Withdrawing From TPP
Shen is familiar to US Navy leaders, as he was the first commander of the Chinese Navy squadron to participate in Pacific Rim naval exercises out of Pearl Harbor in 2014. He also represented China's Navy delegation during the September 2016 International Seapower Symposium at the US Naval War College in Newport, Rhode Island.

Beijing's top-ranking Navy personnel shuffle comes amid international criticism of China's growing assertiveness in the South China Sea. On Wednesday, US President-elect Donald Trump's nominee for Secretary of State, Rex Tillerson, said Beijing should be denied access to the artificial islands it has built in the disputed maritime area.