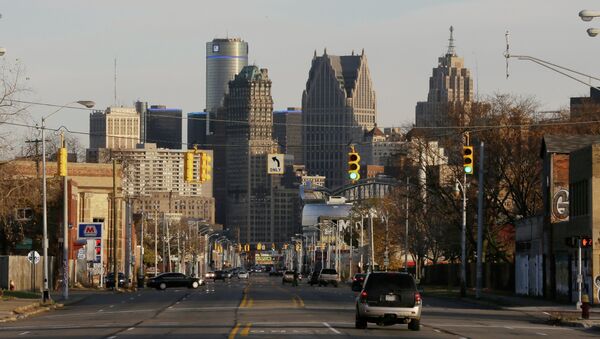 © AP Photo / Carlos Osorio
Subscribe
International
India
Africa
The US city of Detroit has been nicknamed Dead City more than once, but they didn’t mean it this way: a prospective homebuyer discovered a mummified corpse in a house he was about to buy. In a house other people were already living in, no less.
Corpse Unnoticed for Weeks in Moscow Street
Sometimes, when you buy a house, you find a treasure hidden under the carpet or forgotten in the rafters.

In this case, a man exploring a potential new home in Detroit encountered a much less hidden, much less delightful surprise: a mummified body sitting in the back seat of a 1950 Plymouth Acclaim.

According to police spokesperson Dan Donakowski, the police were called to the house around 1 p.m. The body on the backseat of the Plymouth looked like it had been there "for quite some time," Donakowski said, the Detroit Free Press reports.

Wayne County Medical Examiner's Office spokesman Lloyd Jackson told the press medical personnel are unable even to identify whether the person was male or female at this time.

"It's badly decomposed," Jackson said. "And it's mummified."

The Guardian described the mummy's skin as having "the appearance of tanned leather."

Russia
Corpse Found in Suitcase
According to Jackson, the corpse, which was found dressed in a shirt, sweater and pants, had been in the Plymouth for "over a year, at least."

Police questioned the tenants currently renting the house attached to the gruesome garage, and they said because the landlord told them they could not use the garage, they never went in there.

Apparently, taking care of the mummified corpse found in the garage is what some home sellers in Detroit refer to… https://t.co/TTeSh7c2u3 pic.twitter.com/e9IB5lS55y

​According to a police spokesperson, they were told "basically don't go in the garage, don't put anything in the garage."

At this stage, the police can't determine the gender or age of the body, let alone the cause of death. An anthropologist will conduct a special autopsy within a week, and if criminal activity is involved (which seems likely), the police will start an investigation.

It has not been revealed whether the potential buyer eventually accepted or declined the buy, and it is also unclear whether the cost of the property will rise or fall after this discovery.