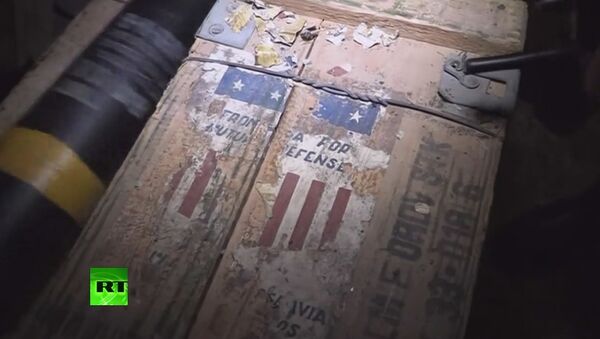 Russian sappers deployed to Aleppo made a sensational discovery this week, uncovering a weapons cache left behind by anti-government militants filled to the brim with ammo for heavy weapons manufactured in countries including the US, Germany and Bulgaria.

Major Ivan Gromov, the commander of the mine-clearing group, told the Rossiya 24 television news channel that his group has been discovering Western-made ammunition, from large-caliber rounds for small arms to rocket artillery shells, littered across the city. Heavy rounds and shells include ammunition manufactured in the United States, Germany and Bulgaria, he added.

In a sensational discovery, Gromov's team and local pro-government militia also found brand new, pristine 122 mm mortar shells, hand grenades and grenade launchers, missiles for multiple rocket launch systems and howitzer shells in a rebel hideout. The source of many of these weapons is clearly marked, with some of the ammo boxes featuring stickers marked 'From USA for Mutual Defense'.

Russian sappers arrived in eastern Aleppo at the beginning of December. Since then, they have cleared over 966 hectares (2,387 acres), including 350 km (about 217 miles) worth of roads and 2,149 buildings from explosive devices. A total of nearly 14,700 explosive devices had been found and defused, including over 6,700 IEDs. Just in the last day, the engineers cleared four schools, a kindergarten and nine mosques of explosive devices.