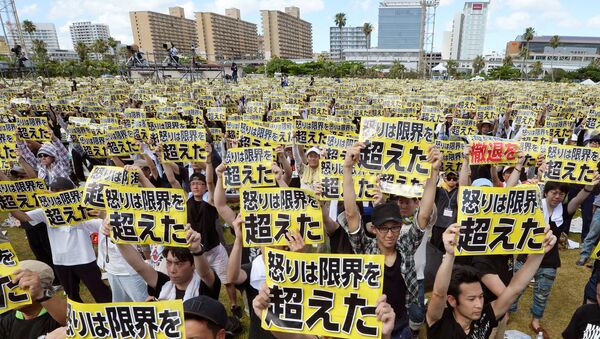 © REUTERS / Kyodo
Subscribe
International
India
Africa
The US and Japan are one step closer to stripping American military base workers from some immunity to Japanese laws, having agreed in principle on some guidelines to limit it.

The US stations about 50,000 troops in Japan under the countries' security agreement, mostly in the US base on Okinawa. An additional 7,000 Americans civilian contractors were also working on the bases as of March, ABC News reports.

None of these personnel are subject to Japanese law while "on duty" or on base, per the 1960 Status of Forces Agreement. Instead, the US can hold subjects on the base until they are indicted by Japan, which the Japanese argue limits their ability to investigate crimes. Other aspects of the agreement, such as exempting military personnel from Japanese visa or passport laws, is also seen as offering Americans a way around the Japanese court system.

Tensions flare regularly in Okinawa over the island's US base and heavy troop presence, with several violent assaults by servicemen stationed there over the decades contributing to the resentment. Most recently, in May, a contractor at the Okinawa base was arrested on charges of raping and murdering a 20-year-old woman.

Since July, the governments have been negotiating several details of the protection such contractors receive while employed on US bases.

Japanese Foreign Minister Fumio Kishida told a regular news conference December 26 that the scope of immunity for some personnel will be narrowed and that the sides have agreed on how to define a "civilian contractor" at an American base, AP reports. Japan hopes to sigh the new agreement "during President Barack Obama's term," he said.

Issues the countries were hoping to hammer out in July included separating skilled workers from unskilled workers and to exclude residents of Japan from such protection. The suspect arrested for murder in May is a resident of Japan, AP points out.

"I am pleased that the United States and Japanese negotiators have successfully reached an agreement in principle that clarifies the scope of the civilian component of the U.S. Armed Forces in Japan… I commend the work of both governments in completing the negotiation of this important agreement, which we expect to be finalized soon," US Defense Secretary Ashton Carter said in a statement released Sunday.