Despite Cutting Arms to Saudi Arabia, US Remains 'Complicit in War Crimes' 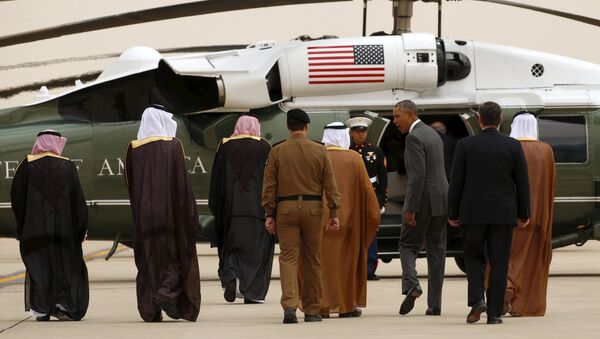 © REUTERS / Kevin Lamarque
Subscribe
The US is cutting arms sales to Saudi Arabia over civilian casualties from airstrikes in Yemen, according to the White House and Pentagon. Despite this announcement, the US has been an ally of Saudi Arabia for many years. Radio Sputnik spoke with Patrick Wilcken, an arms-control researcher at Amnesty International about this issue.

“Clearly the US has been a staunch ally of Saudi Arabia for many years. It has sold Saudi Arabia billions of dollars’ worth equipment over this period and now we can see that there is some limited remorse about the conflict in Yemen which has caused enormous suffering for thousands of civilians resulting in casualties and deaths,” Wilcken told Sputnik.

The researcher further said that despite these limits on supply of precision munitions, the US will continue supplying other systems; they will keep training pilots and supply fuel for aircraft which will carry out sorties in Yemen.

“The US remains potentially complicit in potential war crimes that have been committed in the past by Saudi-led coalition and it continues to supply other members of the coalition which are involved in this conflict,” Wilcken said.

Saudi Aggression Against Yemen Contributed to Development of Daesh, al-Qaeda
According to the researcher currently the US is trying to “mask the hypocrisy” in which on the one hand it expresses concern for the conduct of war, the clear unlawful air strikes such as the one which occurred in October where 140 people were killed in a strike on a funeral in Yemen.

“But on the other hand, the US continues to support the Saudi regime and more broadly the coalition members. When you look across the region, there are series of issues and conflicts that are being made much worse by arms pouring into the region,” the researcher said.

He further spoke about this broad problem in which many different countries supply weapons into the region which results in such atrocities from the rise of various terror groups when these weapons fall into the wrong hands.

“It is very late in the day for the US to suddenly turn around and express concern. But I think on the broader issue of weapons going into the region, we have a very clear position. We have been calling for a complete embargo on weapons going to the Saudi-led coalition for use in Yemen. But we have also seen serious violations on part of all parties of the conflict in Yemen both the Houthi fighters and Saudi-led coalition,” Wilcken said.

Talking about the new administration in the US government and how it will affect the situation in Yemen, the researcher said that everyone right now is trying to second guess as to how the Trump administration will deal with this crisis.

“President-elect Trump has made a lot of different statements about various historical alliances. He has perhaps questioned the historic alliance of the US with the Gulf. He has also questioned the US’s stance on Iran, so right now it is difficult to know as to whether that would be translated into the concrete policy decisions.”

Houthi-Formed Yemeni Government Accuses UK of War Crimes in Yemen
The researcher also spoke about Saudi Arabia and its arms deals with other countries apart from the US.

Wilcken said that Saudi Arabia has had very strong military alliance with the UK and France.

“They have supplied billions of dollars’ worth equipment including fighter jets and ammunition used in strikes. This has come under scrutiny and we have been campaigning here in the UK against the government’s policy of continuing to supply weapons and the government has come under a considerable pressure, especially after the incident including the funeral killings in which British ammunition was identified in the controversial strike and British custom ammunition as well were found on the ground in Yemen,” Wilcken said.

In October, more than 140 people were killed in a strike during a funeral in the country. The Saudi-led coalition supporting Yemen’s government against the Houthis was reportedly responsible for the devastating attack.

The White House later warned Saudi Arabia that US security co-operation was “not a blank check.” Now, precision-guided weapons will no longer be delivered to Saudi Arabia, according to a Pentagon official.

However, while some sales are being scaled back, the US said it will continue to provide Saudi Arabia with intelligence focused on border security. It will also provide training for pilots involved in the Saudi-led air campaign, to avoid civilian casualties wherever possible, the official added.

Thousands of civilians have been killed and nearly three million people have been displaced in Yemen since the war began in 2014.

000000
Popular comments
Let's pretend the US army is not involved at all in Yemen!