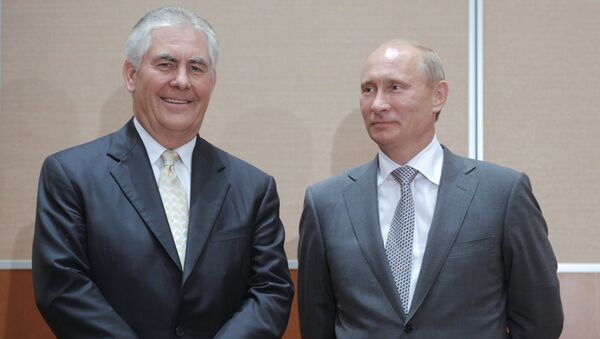 “Trump wants better relations with Russia, and Tillerson's intimate knowledge of the state of their oil industry puts him in a position of strength when he negotiates with them,” Waters said on Wednesday.

However, Tillerson may face challenges to his confirmation from Republican hawks who want to confront Russia rather than work with her, Waters cautioned.

“Tillerson will have a tough time with the Senate because of his ties with Russia and perhaps because of worry that he would favor the Arabs over the Israelis in the Mideast,” Waters claimed.

Nevertheless, Trump’s choice of Tillerson to run US foreign policy was consistent with the revolution he has promised in ending decades of nation-building and ideology-driven policies around the world, Waters explained.

“Trump said throughout the campaign that he would turn to America's top businessmen who have the vision and toughness to look out for US interests and the skills to negotiate good deals for America. Tillerson fits the mold,” Waters said.

Waters predicted that Tillerson would draw on his lifelong business executive background to negotiate new diplomatic as well as economic arrangements for the United States with other countries.

“The important thing is that he will not be a dealmaker who is just looking to make a deal. In other words… his goal will be getting a deal that is good for the United States,” he said.

Waters said Tillerson’s different experience from professional diplomats or politicians made him much more qualified for the job.

“Tillerson is not the sort of amateur who will lose sight of America's goals in the heat of the negotiation. You don't become CEO of Exxon Mobil if you lose sight of your goals and minimal requirements while you negotiate,” he said.

Tillerson’s background will give him an important advantage when he negotiates with the Saudis, Waters predicted.

Exxon Mobil CEO Tillerson to Step Down on January 1
“His background and knowledge of the Arab oil states' economic positions and political players offer the possibility that he will have new carrots and sticks to use in negotiating Mideast peace,” Waters argued.

“Tillerson is a businessman. All of his dealings with foreign governments have been focused on commercial matters,” Brennan said. “He has had to pay attention to the internal politics of Russia and everyone else with whom he has been engaged.”

However, Brenner cautioned that Tillerson had not needed to develop expertise in shaping national strategies in his decades in the oil industry.