Exxon Mobil CEO Tillerson to Step Down on January 1 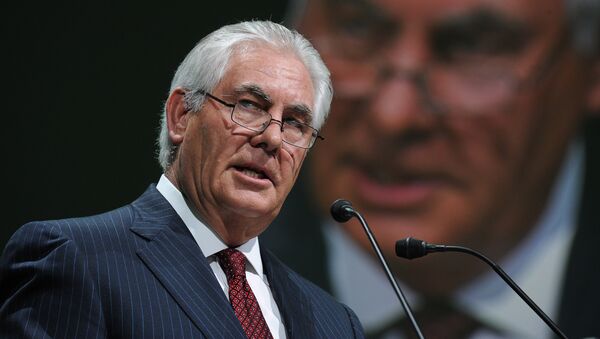 © AFP 2023 / ERIC PIERMONT
Subscribe
International
India
Africa
Exxon Mobil chief Rex Tillerson, nominated for US secretary of state, will retire and hand over his position to the corporation's current president Darren Woods on January 1, the company said in a press release.

WASHINGTON (Sputnik) — President-elect Donald Trump announced his nomination of Tillerson as secretary of state on Tuesday, which sparked vigorous debates over his business-related connections to Russia. Trump's nomination is subject to review by the US Senate.

"After consideration, Tillerson concluded, and the board agreed, that given the significant requirements associated with the confirmation [for secretary of state] process, it was appropriate to move the retirement date [originally scheduled for March]," the release stated on Wednesday.

Tillerson to Improve US Relations With Arab Countries, Russia
Exxon Mobil praised the 65-years-old for "generating value for shareholders" improving the corporation’s image around the world during more than 41 years of service.

According to the release, Tillerson joined Exxon back in 1975 as a production engineer. Since then, he held different senior positions and was elected chairman and chief executive officer of Exxon Mobil in January 2006.