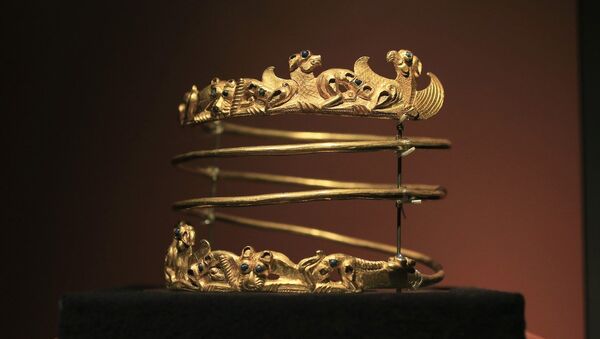 © East News / AP Photo/Peter Dejong
Subscribe
International
India
Africa
Sputnik presents facts and details on the history of the dispute between Russia and Ukraine over the Scythian gold collection.

MOSCOW (Sputnik) – An Amsterdam court decided on Wednesday to give disputed collection of Scythian gold to Ukraine, not to Crimea where it was kept before the peninsula’s reunification with Russia.

Crimean Museums to Appeal Dutch Court Decision to Give Scythian Gold to Kiev
In early February 2014, an exhibition, entitled Crimea: Gold and Secrets from the Black Sea, opened at the Allard Pierson Museum, the archaeological museum of the University of Amsterdam. This was before the reunification of Crimea with Russia.

Prior to that, the exhibition had been located at the Landes Museum, the Rhineland regional-history museum in Bonn, Germany.

Under the contract, the exhibition was scheduled to end on May 28, 2014, but in February, its deadline was extended until August 31, 2014.

In March 2014, Ukrainian authorities, that did not recognize Crimea's reunification with Russia, claimed the rights to the collection. The Ukrainian Ministry of Culture said the collection’s exhibits would be returned to Kiev because they were the state property of the country. Crimean authorities called the Ukrainian actions an attempted hostile takeover.

Dutch Court Rejects Ukraine's Request to Intervene in Scythian Gold Case
Valentina Mordvintseva, the exhibition’s curator, from the Crimean Branch of the Institute of Archaeology of Ukraine’s National Academy of Sciences, said Dutch authorities had guaranteed the return of all exhibits to museums in Crimea.

The exhibition was officially closed in late August, but the collection did not return to the Crimean museums, due to disagreements between Ukraine and Crimea.

In January 2015, media reported that the Ukrainian Ministry of Culture and the Allard Pierson Museum displaying the unique exhibits had joined the courtroom battle.

In April 2015, the court recognized Ukraine as a party to litigation on the return of the Scythian gold collection from the Netherlands, and turned down a similar request from the Dutch side on taking part in litigation.

Crimean Museums File Lawsuit Over Scythian Gold Collection
A specially employed international law firm represented in Amsterdam interests of the Crimean museums, and the museums were not directly involved in court hearings.

The Russian side was guided by a convention signed after World War II. At that time, signatories agreed on the continuity of museum collections. Experts believe that the Crimean museums could make the following three weighty arguments for returning the Scythian gold collection to Crimea: the exhibits were unearthed in Crimea, by Crimean archaeologists, and they are characteristic of Crimean archaeological culture.

The Ukrainian side was also voicing arguments under the same convention.

Ukrainian experts note that the Ukrainian state had authorized the collection’s delivery to the Netherlands, and that the latter had pledged to return these artifacts to Ukraine under contracts signed with each Crimean museum. According to them, Ukrainian experts believe that Russia has occupied Crimea.

At first, efforts were made to settle the two-year case out of court, by exchanging letters. On October 5, 2016, the court reviewed the case for the first time.

On December 3, 2016, media reported that Ukraine had asked Interpol to issue an international search warrant for the Scythian gold collection, currently being stored at the archaeological museum in Amsterdam. The relevant document was posted on the website of the so-called Prosecutor’s Office of the Autonomous Republic of Crimea, which was established in Ukraine. This request was motivated by the fact that Kiev’s Pechersky District Court has upheld its request and impounded the museum exhibits.