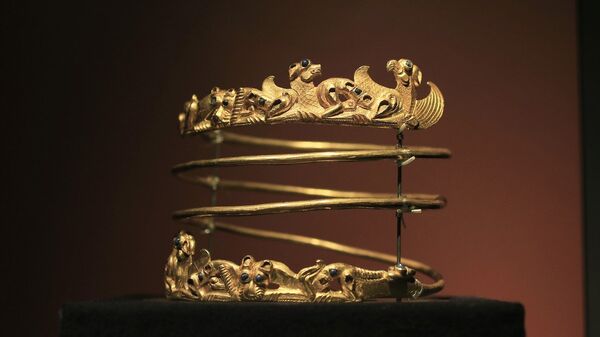 © East News / AP Photo/Peter Dejong
Subscribe
International
India
Africa
A collection of Scythian art from Crimean museums was moved to the Netherlands' Allard Pierson Museum to be exhibited in February 2014. After Crimea had reunified with Russia, the Dutch museum decided not to return the gold to either Ukraine or Russia.

Crimean Museums File Lawsuit Over Scythian Gold Collection
MOSCOW (Sputnik) – A district court in Amsterdam has rejected a request by Ukrainian authorities to intervene in an ongoing tug-of-war between Ukraine and Crimea over the return of a Scythian gold exhibit from a museum in the Netherlands, a Dutch judicial spokeswoman told RIA Novosti on Wednesday.

The collection of Scythian art was delivered from five museums, one in Kiev and four in Crimea, to the Netherlands' Allard Pierson Museum to be exhibited in February 2014, when Crimea was still part of Ukraine. Later in 2014, when Crimea reunified with Russia, the museum decided not to return the gold to either Ukraine or Russia and urged an official investigation that would identify the owner.