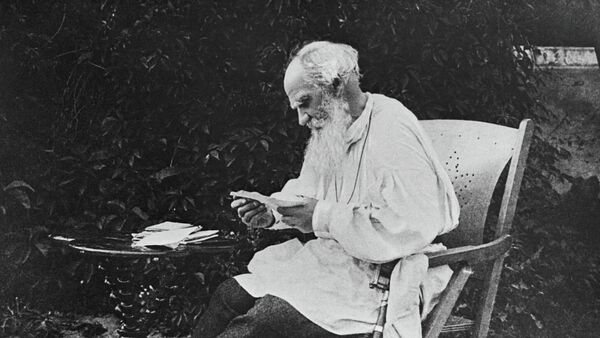 © Sputnik / O. Ignatovich
/
Go to the photo bank
Subscribe
The American-Russian Cultural Cooperation Foundation (ARCCF) celebrated the legacy of Russian genius Leo Tolstoy and his contribution to strengthening cultural ties between Russia and the United States through his correspondence with American readers at its annual gala in Washington.

No Longer an Enigma: Study the Language of Pushkin, Tolstoy From Anywhere
WASHINGTON (Sputnik) — The event "America and Tolstoy: A Dialogue From Quill to Tweet" held on Tuesday at one of the city’s prestigious social clubs, The Cosmos, honored the great writer with a magnificent program that featured performers from Broadway, the Kennedy Center and the National Symphony Orchestra’s Last Stand Quartet, along with several speeches.

The author of masterpieces War and Peace and Anna Karenina, among other numerous works known and admired worldwide, is famous for his prolific exchange of letters with people across the globe, including Americans.

The centerpiece of the program was a dramatized reading of letters sent by Americans, including journalists and politicians, to the esteemed writer. The notable guests read the letters aloud while a Tolstoy impersonator voiced responses.

"It is probably well-known to you that the reading public of America considers you the greatest of living authors," one of the founders of the US city of St. Petersburg in Florida, Peter Demens, said in a letter to Tolstoy.

Leo Tolstoy's 'War And Peace' to Be Read Live Across 30 Cities
"I beg to assure you that my visit to you was most refreshing and helpful," three-time Democratic Party nominee for President William Jennings Bryan said in a letter to Tolstoy after meeting the icon during a visit to Yasnaya Polyana, a writer's house museum.

Deputy Director of the Leo Tolstoy Museum-Estate Yasnaya Polyana, Galina Alexeeva, who participated in the event, noted that numerous Americans visited Tolstoy during his lifetime. But she also stressed that the flow of people — including students, scholars, and tourists — remains high today.

"The first American who came to Yasnaya Polyana in 1868 was an American diplomat in Moscow, Eugene Schuyler, who later translated Tolstoy’s The Sevastopol Stories and The Cossacks," Alexeeva explained, noting that Schuyler was the first translator of Tolstoy in America.

Alexeeva also pointed out that the first American journalist who visited and interviewed Tolstoy was George Kennan in 1886 on behalf of Century and Outlook magazines.

Tourists, she added, just this year included US Ambassador to Russia John Tefft who visited the museum in April and October.

ARCCF’s Executive Director Alexander Potemkin told Sputnik that the organizers of the event wanted to highlight the connection between Tolstoy and the American people.

"Tolstoy loved America and the Americans loved him," Potemkin said. "He considered it the most sympathetic country. It is necessary to do something to improve the relations between the countries. I think it would be great to return Tolstoy here now."

Russian Ambassador to the United States Sergey Kislyak told reporters following the event that he believed the power of culture could mend relations between the two countries.

"This is an amazing event. It was not just about the great writer, but it’s the Americans’ declaration of love to our great author and Russian culture. I have faith that culture and cultural ties can help improve our relations," Kislyak said.

Russian Literature Genius Leo Tolstoy’s Personal Diaries Become Available Online
Former US congressman James Symington told Sputnik that events like this should remind everybody about the importance of strong Russian-American affinity and friendship.

"I think that our togetherness does a lot to ensure a peaceful, prosperous world. When Russia and America are together nobody can stop that progress," Symington said. "When we are friends with each other as we surely are, we form a bond which I think serves as a message to mankind: "this is how we should live [and] be at peace to one another."

Symington believes that the interest among the US public with respect to Tolstoy’s work will remain strong.

"Tolstoy had a mind that transcended nationalities and races. He projected the human spirit into the future," he said. "Anybody who reads Tolstoy and gets to think about him, and his life, what he’s meant to literature and to life, is uplifted by that, strengthened by that. There are very few people in history that have had that effect, he did."

The gala gathered US and Russian literary scholars, former and current diplomats, and politicians, including Russian Ambassador to the United States Sergey Kislyak, former US Ambassador to Russia John Beyrle, former US congressman James Symington, and US philanthropist Founder of the Institute and Susan Carmel Lehrman among others.

The ARCCF, founded 24 years ago by a group of prominent Americans, aims to promote cultural cooperation between the United States and Russia by organizing galas, concerts, exhibitions, and major commemorative events.