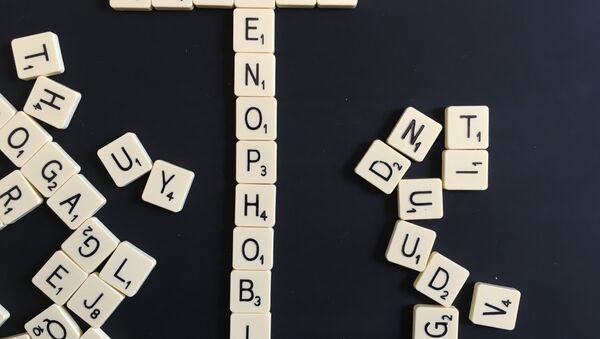 © Flickr / Jeff Djevdet
Subscribe
International
India
Africa
Dictionary.com has announced its word of the year is "xenophobia." Each year the website says it aims to choose a word which "embodies a major theme resonating deeply in the cultural consciousness." In 2015, it was "identity," this year the word reflects a darker 2016.

The reference website reported a rise in the number of searches of the word, xenophobia, following the election of US President-elect Donald Trump. The other spike in its search history followed the UK's referendum on its membership of the European Union, held on June 23 2016.

​According to Dictionary.com searchers for the term, xenophobia, increased by 938 percent on its website. It was matched by recorded hate crime figures in the UK which increased by 41 percent in July 2016.

41% increase in hate crime. Britain is fast becoming an unrecognisable country to the one I believed it to be.

​"Brexit was responsible for the largest uptick in the interest of the terms in all of 2016 with hundreds of users looking up the term each hour," Professor B. Reich from the University of California said, adding that the another spike in the search for the word occurred after US President Barak Obama spoke of Donald Trump's "xenophobic rhetoric" in June 2016.

Here's what @RBReich had to say about our Word of the Year choice: https://t.co/MUdQoQS0cD#WordOfTheYear #Xenophobia

​The website defines the word as "fear or hatred of foreigners, people from different cultures, or strangers." Naming 'xenophobia' word of the year goes in some part to celebrate it. A claim refuted by a spokesman for Dictionary.com who said it is a word not to be celebrated.

"Perhaps some of our users were unfamiliar with the word xenophobia, while others might have looked it up to double-check the spelling or pronunciation. Maybe our users looked it up to affirm what they already knew about the meaning, or to share the definition with others," the spokesman said.

​"What we do know is that global events to political rhetoric, xenophobia was a recurring subject of discourse in 2016."

When #Xenophobia is the most looked up word in the dictionary, we need to stop and think about how we're living. #TipTuesday #NotOK

​"Despite being chosen as the 2016 Word of the Year, xenophobia is not to be celebrated. Rather it's a word to reflect upon deeply in light of the events of the recent past," Dictionary.com's spokesman said.

Perhaps the darkest event before the British people went to the polls to decide whether they wanted to stay or leave the EU, was the brutal murder of MP Jo Cox by Thomas Mair, a right-wing extremist during the EU referendum campaign.

The Old Bailey in London heard that Thomas Mair shouted: "This is for Britain", "keep Britain independent" as he attacked and killed the MP for Batley and Spen.

After the #brext vote, hate crime has spiked in the UK. It is time to show that Britain is #betterthanthat (cl)

​However many hate crimes go unreported, suggesting the surge after Brexit is just the tip of the iceberg and 'xenophobia' is a word worryingly accurate to describe the discourse of 2016.