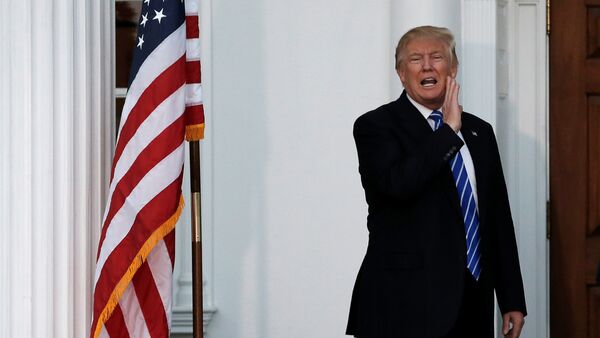 © REUTERS / Mike Segar
Subscribe
International
India
Africa
Donald Trump has never made a secret of his intentions to prevent the Trans-Pacific Partnership from coming into force. However, Norwegian experts believe that this would give China greater influence in world trade. Provided that this trend continues, it could lead to a further increase of migrants to Europe and North America.

Fear and Loathing Spread in Scandinavia as Trump Sweeps to Victory
TTP or Trans-Pacific Partnership is a free trade agreement between twelve countries in Asia, North and South America that was signed in February. According to his own statements, the US President-elect wants the US to draw out of this agreement before it is ratified. Previously, Trump blamed the loss of American jobs on international trade.

According to Aanund Hylland, a professor emeritus of economics at the University of Oslo, Trump's excessive protectionism may lead to China gaining greater influence over the global trade market, which is hardly Trump's intent.

"This is hardly anything Trump would like to see, but might very well become the consequence of his actions. Other parties to the TPP will hereby have a stronger incentive to turn to China and start direct negotiations," Aanund Hylland said, as quoted by Norwegian newspaper Dagbladet.

"One might fear more penalty measures in taxation for the outer world, such as Mexico. This will make it particularly difficult for countries that are struggling to break out of poverty, since they will no longer be able to sell their goods to the rich world," Kjell Grandhagen said.

Scandinavia's Got Nothing to Fear, With or Without Trump - Danish MP
According to Grandhagen, US protectionism may lead to poor countries becoming even poorer, which would set more economic migrants en route to Europe and North America. Grandhagen went on to describe protectionism as "the worst thing to do," since it deprived people of their only way out of poverty.

"I believe growing migration to be one of the ensuing risks. Furthermore, it will lead to greater unrest and increase the threat of war and conflict both internally and between countries," Grandhagen warned.

Aanund Hylland concurred that disproportionate restrictions such as protective duties may be harmful to poor countries. At the same time, such measures may be well justified, he pointed out.

"Extensive protectionism is bad, but there are good reasons as well. For example, Norway itself would like to maintain its agriculture, whereas developing countries which are about to go into industrialization have good reasons to protect their industry," Hylland argued.