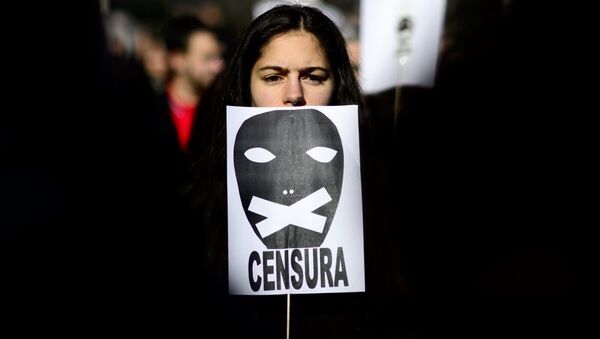 © AFP 2021 / DANI POZO
Subscribe
The resolution adopted by the European Parliament against Russia's media outlets is the first step towards imposing censorship against all media sources which express different views from those promoted by the EU leadership, Italian journalist Giulietto Chiesa warns.

The European Parliament's decision to crack down on Russia's news websites, most notably Sputnik and RT, and considering them alongside terrorist groups like Daesh and Al-Qaeda, has stirred a heated debate among international media pundits and independent observers.

"I write for Sputnik and cooperate with different Russian television broadcasters. So what will they do to me now?" Giulietto Chiesa, an Italian journalist and Director of PandoraTV.it, asks rhetorically.

According to Chiesa, the adoption of the controversial resolution is a step towards imposing censorship not only on Russian news websites but on all media outlets which express a point of view different from that of the EU establishment.

"To put it bluntly: the aim of the resolution, whatever arguments are cited, is to impose censorship against all media — both Russian and non-Russian — which express opinions different from those postulated by Western leaders," Chiesa writes in his op-ed for Sputnik Italia.

EU Resolution on Russian Media 'Insult to Daesh Victims' – Serbian Minister
The Italian journalist calls attention to the fact that in accordance with the criteria cited by the resolution every citizen of the European Union who supports, reproduces or disseminates opinions and critique of the West's actions can be now branded as "a supporter of the Kremlin propaganda" that poses a "threat" to the sovereignty of this or that EU member state or the bloc in general.

"It is clear to anyone that this is the way to kick off a 'witch hunt', that would ultimately silence all forms of political dissent in Europe," the Italian journalist warns.

"Therefore what lies at the root of the problem is not just the right to spread the views expressed by the Russian media in the West, but the right of free speech and expression for all journalists, bloggers and media activists who work and live in the West," Chiesa highlights.

EU Resolution on Sputnik, RT: 'Media Siege Formulated by the United States'
Commenting on the result of the vote in the European Parliament the Italian journalist notes that the vote showed a change of mind toward Russia among EU lawmakers.

While there is a powerful anti-Russian lobby comprising of a hundred or so MPs, apparently nostalgic of the Cold War times, this time the resolution was passed with 304 votes, while 179 legislators were against and 208 abstained from voting, Chiesa underscores.

Chiesa asks ironically whether the EU establishment would now label the French presidential candidate Francois Fillon as "a Kremlin propagandist" and a "threat" to the European sovereignty given the fact that during his interview with Radio Europe 1 Fillon urged his audience not to believe that Russia is Europe's enemy. 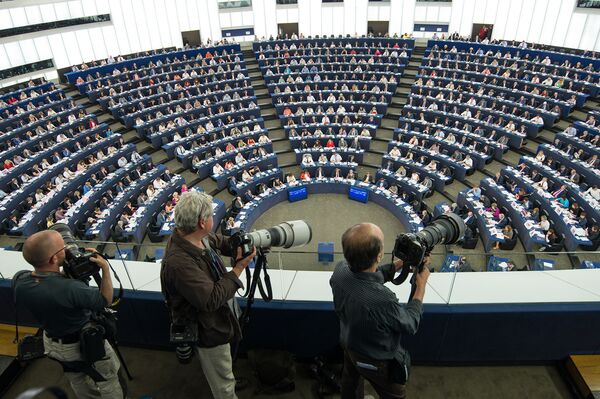 Citing the resolution's passage de facto equating Russian media organizations to al-Qaeda and Daesh terrorist groups' propaganda, the journalist stresses that it is highly inappropriate to paint journalists and terrorists with one and the same brush.

"I don't think it is right to equate the work of Russian journalists (or any other media workers) and the actions of terrorist groups. I also believe it's not right to brand mass media of any country as a propaganda tool," Cosic told Sputnik.

If a media outlet has indeed been spotted disseminating "propaganda" then the evidence needs to be presented to prove this instead of labeling all media as instruments of propaganda, he noted.

"This greatly worries me, as we had a very negative experience of group stigmatizing here in Serbia, when NATO bombed the building of RTS channel in 1999, justifying that as 'the struggle against the Milosevic propaganda machine.' The airstrikes killed 16 of our colleagues," the journalist emphasized.

The resolution adopted by the European Parliament claims that the Sputnik news agency, the RT channel, the Russkiy Mir foundation and the Russian Federal Agency for the Commonwealth of Independent States, Compatriots Living Abroad, and International Cultural Cooperation (Rossotrudnichestvo) pose a threat to the European Union.

To resist the "Russian propaganda" the document calls on the EU member states to cooperate with NATO to develop common mechanisms to counter "hybrid threats."

000000
Popular comments
Brexiteers warned the world a thousand times over on how undemocratic the EU had become. In response, the British Marxist Corbynite journalists who have infiltrated Sputnik did all that was possible to support the EU and pro-EU parties like the SNP. Pastor Niemoller comes to mind.