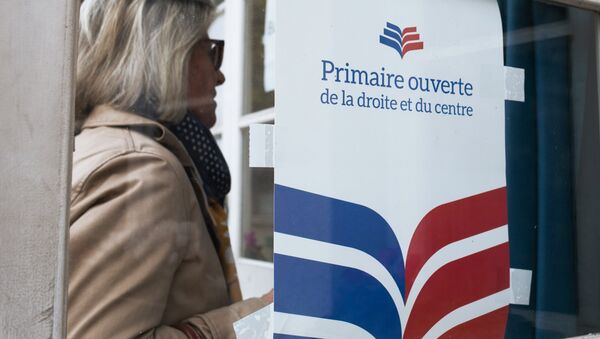 © Sputnik / Irina Kalashnikova
/
Go to the photo bank
Subscribe
The Brexit vote, the US presidential election and the recent center-right primaries in France show that public opinion polls are losing credibility. An increasing number of people are not interested in taking part in surveys because they are often politically biased.

Trump’s Victory Becoming Surprise Because of Wrong Polling
Opinion polls in France predicted a faceoff between former President Nicolas Sarkozy and former Premier Alain Juppe in the second round of the presidential primaries in the Republicans center-right party.

However, the final results of the Sunday vote were sensational, rendering predictions by sociologists and analysts all wrong, once again after the Brexit referendum and Donald Trump’s victory in the United States presidential election.

Public opinion surveys have been getting more and more unreliable recently.

Fillon won the primaries with 44 percent of votes, followed by Juppe with 28.1 percent. Sarkozy came third with 21.1 percent of votes. In the US, Donald Trump secured a victory with 290 electoral votes. In Britain, 52 percent of the electorate vote for the withdrawal from the European Union.
Meanwhile, in each of these cases, polls and surveys predicted the opposite results.

Brexit, Trump, Request to Impeach Hollande: Part of New 'Shocking Global Trend'?
"They’re always wrong! Why? Because they [media and polling agencies] deliberately don’t want to see what is really going on. They ignore democracy and the will of the people," Claude Chollet, president of the Observatory of Journalists and Media Information (OJIM), told Sputnik France.

Public opinion studies and "media behind them" are inclined to translate the views of ruling elites, said Francois-Bernard Huyghe, research manager at the French Institute for International and Strategic Affairs (IRIS).

"They are frightened by the idea that people have their own voice and will. And they just ignore this fact like it was in the event of Trump or the French primaries. They’d better prefer Alain Juppe, who was considered the favorite of media and the establishment," Huyghe told Sputnik France.

He noted that recently Francois Fillon has significantly bolstered his positions while no related changes were registered in public opinion surveys.

"Many of those participating in polls deliberately change their opinion or even conceal it because they think that the polling agency works for the government," he added.

French Right Defies Polls, Sidelines Sarkozy, Set to Take on Far-Right Le Pen
"The recent primaries in the Republicans party have taken on public opinion polls because despite the fact that they were organized by one party people of any political views could come to cast their ballots," argued Jean Chiche, doctor of mathematical statistics and a researcher at the National Center for Strategic Studies of the French Center of Political Research (CEVIPOF).

He also underscored that currently there are problems with analysis and interpretation of data obtained in polls.

"The number of respondents [in polls concerning the primaries in France] was counted inaccurately. Moreover, their opinions were wrongly interpreted. They used classical polling tools. For example, respondents were asked whether they were sure that they would take part in the vote. This is not the best way to assess the number of people who will definitely come to the polling stations," the expert pointed out.

Chiche underscored that this problem is "technical and public at the same time."

"The number of respondents in polls has been decreasing over the recent years. The quality of surveys is also decreasing. As a result, people lose interest in participating even in serious and credible polls," he concluded.

000000
Popular comments
The global media is overwhelmingly liberal, left wing, secular and globalist. They have a predetermined agenda, and in the USA they made it a point of including more Democrats as opposed to Republicans in their surveys. Another thing is that they normally telephone people via landline telephones as opposed to cell phones or other choices. More people own cell phones and smart phones today, so this is another factor which limits their accuracy.