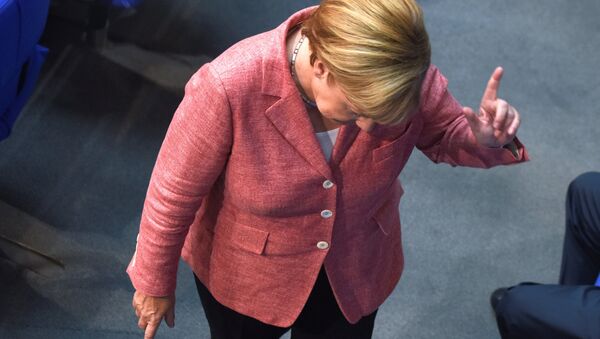 Placing her bet on Hillary Clinton German Chancellor Angela Merkel has landed in hot water following the November election in the US; to make matters worse, she left the Germans wide open to criticism, due to her irresponsible foreign policy, Willy Wimmer, former Parliamentary State Secretary in the German Defense Ministry and a leading politician of the Christian Democratic Party (CDU), wrote in his op-ed for Sputnik.

"Berlin did not show any interest toward [Republican] candidate [Donald] Trump. It flirted with Hillary Clinton so shamelessly (and unprofessionally) as it never had flirted with anyone for several past decades. In the eyes of the German leadership Trump remained sidelined; however, previously, neither party or nor government [in Germany] have ever allowed themselves to behave in such a way," Wimmer said.

Trump's Victory: EU Establishment Was Caught With Pants Down
"It's not hard to guess who will pay the price for this arrogance — the German people, obviously," he said, adding that Berlin seemingly cares little about the consequences.

Trump's victory has caught Berlin off guard. Curiously enough, his win has not prevented the German media from further snubbing the US President-elect.

On November 9, a leading German language business newspaper, The Handelsblatt, published the article entitled Der unvorstellbare Präsident ("The President You Would Never Imagine").

Dr.  Jens Münchrath, the author of the comment, argued that Trump's "political program — if you call it that — is so erratic that nobody really took this billionaire from New York seriously. Now he will exercise leadership of the liberal world."

The reputable German media outlet Die Zeit went as far as saying, "Donald Trump was just a bad joke for a long time. Now he will be president. The world must be afraid of what the next step of this unpredictable man will be."

Likewise, The Süddeutsche Zeitung raised the alarm on the same very day: "President Trump: For many, the worst fear has become reality. The US is turning to an authoritarian leader — democracy is facing a historic challenge," it said.

While during the following days the German media have lowered their alarmist tone, they began to lecture the newly elected American president on how he should deal with Europe.

For instance, Michael Sturmer of Die Welt explained what exactly Trump "got wrong" about European security and why there is no alternative for American "boots on the ground" in Europe. Predictably, Sturmer was talking about the non-existent "Russian threat" to the European Union.

Russia Becoming New Center of Gravity for Eastern Europe Against All Odds
The media's stance is understandable in the context of Merkel's tone adopted toward the US President-elect.

"Angela Merkel carefully expressed conditionality when she said she looked forward to working with Trump on the basis of 'shared values of democracy, freedom and respect for the law and the dignity of man, independent of origin, skin color, religion, gender, sexual orientation or political views'," the media outlet pointed out.

The media outlet suggested that "Merkel's response to Trump's election, her message to him, was in part an attempt at reintegrative shaming," explaining that "reintegrative shaming" is a way of expressing displeasure at bad behavior in a non-direct way.

According to Wimmer, Trump's election is a step in the right direction.

"I was so relieved, like never before, for I had a feeling this morning that this decision saved us from a great war. I believe that the new American President, unlike his opponent, is ready for a reasonable, practicable and trustworthy collaboration with other countries in the world — and that gives me hope," Wimmer told Sputnik Deutschland on November 9 and added that with Hillary Clinton as president, a third world war would have been just around the corner.

Trump's Victory Prevented World War 3
In his op-ed Wimmer envisions that US President Donald Trump and Russian President Vladimir Putin will find a way to de-escalate tensions simmering between the EU and Russia and that NATO troops deployed in close proximity to Russian borders will be eventually removed.

"Maybe Trump will make it possible," the German politician remarked, "All in all, his ancestors came from the same German region that "peace chancellor" Helmut Kohl came from.