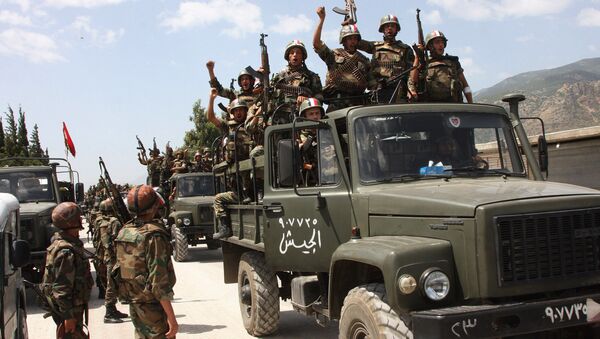 © AP Photo
Subscribe
President-elect Donald Trump is likely to shift the US focus from Eastern Europe and the Middle East to the Asia Pacific region, a Russian military expert told Sputnik. Trump's new foreign policy strategy may lead to a US-Russian compromise on both Ukraine and Syria.

'Trump Will Jeopardize US Positions if He Keeps His Election Promises'
US President-elect Donald Trump is likely to increase the pressure on both America's allies and competitors in the Asia Pacific region, Russian military expert Vasily Kashin remarked in his recent interview with Sputnik.

"Trump's approach is two-pronged. First, Trump will never again sacrifice the US economy on the altar of foreign policy by entering into bad trade deals like the North American Free Trade Agreement, allowing China into the World Trade Organization, and passing the proposed TPP," Gray and Navarro wrote.

"Second, Trump will steadfastly pursue a strategy of peace through strength, an axiom of Ronald Reagan that was abandoned under the Obama administration," they underscored.

Citing statements made by Trump and his advisers, Kashin suggested that "the new US administration will step up the pressure on its biggest regional allies — Japan and South Korea."

"Washington will try to force them to 'make a greater contribution to the common defense'," the expert said, "This pressure can cause certain resistance on the part of Tokyo and Seoul."

Indeed, speaking to Sputnik, Japanese academic Dr. Seijiro Takeshita of the University of Shizuoka warned Trump's idea of fair "burden sharing" among the US and its Asia-Pacific allies can backfire.

"If he [Trump] is asking for more it will also induce a lot of right-wing movements in Japan. They will say 'Hey, why won't we arm ourselves then, why should we listen to the United States?' Which again would not do anybody any good," the Japanese academic highlighted.

America's Rebalance: Trump's Election Opened Door to New Global Order
However, according to Kashin, Trump's new approach toward Tokyo and Seoul is likely to bear fruit: following Trump's win Washington's Asia-Pacific allies have found themselves on thin ice; to cope with Trump's unpredictability they will begin to rely more on themselves and less on the US.

"In all likelihood, the US will bolster its military and military-technical support for Taiwan, dubbed by one of Trump's advisors a "beacon of democracy" in Asia," Kashin continued.

"Combined with the socio-political situation on the island which is currently unfavorable for China, this support will force the Chinese to concentrate large forces in areas adjacent to the island, thus creating a permanent point of tension there," the expert predicts. 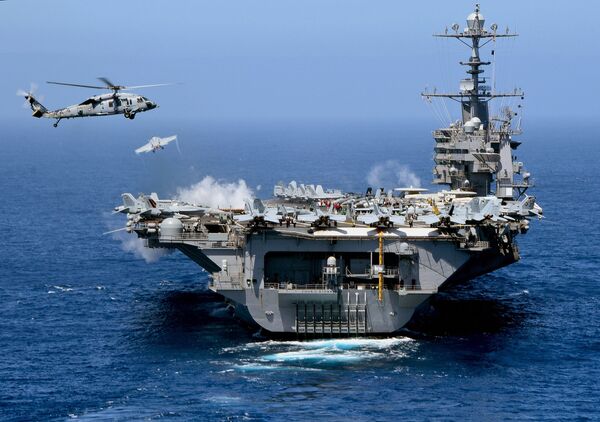 Quoting Gray and Navarro, Kashin remarked that the Obama administration's policy of "strategic patience" with North Korea has indeed failed.

However, while China and Russia are urging the international community to enter into a dialogue with Pyongyang and abandon the policy of confrontation and sanctions toward North Korea, the US under Trump will most likely move in the opposite direction.

"It can be assumed that Washington will use the North Korean issue to increase pressure on China," Kashin told Sputnik, suggesting that the US may also impose unilateral economic sanctions on Chinese companies which have economic relations with the Democratic People's Republic of Korea (DPRK).

Trump's Asian Pivot: 'US to Jump on One Belt, One Road Bandwagon'
Simultaneously, Washington will launch a "charm offensive" against its Southeast Asian partners, the expert believes.

"The US will convince small Southeast Asian nations that Washington [under Trump] is a strong, stable and reliable ally which won't hesitate to come to their rescue at once and, apparently, will not ask too many questions about domestic policies and human rights issues. Beijing's mistakes will be used to present China as a 'hegemonic' power, which cannot be trusted," Kashin elaborated.

Trump and his advisers have repeatedly highlighted the importance of the "peace through strength" approach. According to the expert, it is hard to predict whether the Reagan-style foreign policy strategy will really bear any fruit.

Kashin noted that the success of the much discussed Reagan strategy has been largely overestimated.

While observers say that Reagan "defeated the USSR" and "won the Cold War" they usually turn a blind eye to the fact that the collapse of the Soviet Union in the 1990s was caused primarily by internal factors, he pointed out.

Kashin drew attention to the fact that by 1987 Reagan had come to the conclusion that the policy of tough confrontation with Moscow had proven futile and embarked on a path of compromise with the US' longstanding rival. As a result, the two powers brought the Cold War to an end.

However, in the light of Trump's new Asia-Pacific policy, it is likely that the US will seek to diminish its presence in Eastern Europe and gain rapid military victories over radical Islamists in the Middle East, according to Kashin.

"This gives Russia a chance to reach compromises on the Syrian and Ukrainian problems with Washington on mutually acceptable terms," he stressed, adding that the potential US-Russian agreement may be followed by the removal of Western sanctions.

"However, the situation in the Asia-Pacific region will become much more explosive," the expert warned, "that to some extent will also affect the interests of Russia."

000000
Popular comments
Trump's policies on NATO and Japan/S. Korea, are very old school. Something the GI's used to talk about 30 years ago, but never really implemented, before the US was bent over with the trade deals.
double bonus
17 November 2016, 04:57 GMT
000000
Newsfeed
0
New firstOld first
loader
LIVE
Заголовок открываемого материала
Access to the chat has been blocked for violating the rules . You will be able to participate again through:∞. If you do not agree with the blocking, please use the feedback form
The discussion is closed. You can participate in the discussion within 24 hours after the publication of the article.
To participate in the discussion
log in or register
loader
Chats
Заголовок открываемого материала
Worldwide
InternationalEnglishEnglishMundoEspañolSpanish
Europe
DeutschlandDeutschGermanFranceFrançaisFrenchΕλλάδαΕλληνικάGreekItaliaItalianoItalianČeská republikaČeštinaCzechPolskaPolskiPolishСрбиjаСрпскиSerbianLatvijaLatviešuLatvianLietuvaLietuviųLithuanianMoldovaMoldoveneascăMoldavianБеларусьБеларускiBelarusian
Transcaucasia
ԱրմենիաՀայերենArmenianАҧсныАҧсышәалаAbkhazХуссар ИрыстонИронауОssetianსაქართველოქართულიGeorgianAzərbaycanАzərbaycancaAzerbaijani
Middle East
Sputnik عربيArabicArabicTürkiyeTürkçeTurkishSputnik ایرانPersianPersianSputnik افغانستانDariDari
Central Asia
ҚазақстанҚазақ тіліKazakhКыргызстанКыргызчаKyrgyzOʻzbekistonЎзбекчаUzbekТоҷикистонТоҷикӣTajik
East & Southeast Asia
Việt NamTiếng ViệtVietnamese日本日本語Japanese俄罗斯卫星通讯社中文（简体）Chinese (simplified)俄罗斯卫星通讯社中文（繁体）Chinese (traditional)
South America
BrasilPortuguêsPortuguese
NewsfeedBreaking
22:38 GMTAlternative for Germany to Continue Supporting Nord Stream 2 After Election - Co-Chairman
22:01 GMTMilitants in Aleppo Tried to Force Way From Turkish-Controlled Area - Russian Military
21:48 GMTGermans See No Use to Vote for CDU Without Merkel at Helm - Afd Politician
21:19 GMTGerman Conservatives Suffer Catastrophic Defeat in General Election – Senior Official
21:00 GMTGermany's FDP Leader Hints at Coalition Talks With Greens
20:45 GMTMacron Files Complaint Against Paparazzi for Invasion of Privacy - Reports
20:16 GMTTwitter Removes Blue Verified Badge From Accounts of Several Afghan Ministries - Reports
20:00 GMTLaschet, Scholz Want Coalition Talks to End by Christmas
19:41 GMTCIA Was Ready to Start Firefight in London to Prevent Russia From Busting Out Assange, Media Claims
19:20 GMTSuicide Pact? Top Labour Remainer Says Party Should Campaign to Rejoin EU
18:58 GMTVideo: Miss France 2019 Confronted by 'Teenage Gang' That Threw Stones at Her in Paris
18:47 GMTFree For All! Enraged Moped Drivers Fight in London Amid Lack of Fuel - Video
18:39 GMTPSG's Kylian Mbappe Caught on Camera 'Lamenting Neymar Would Not Give Him Passes'
18:35 GMTPowerful 5.7-Magnitude Earthquake Hits Philippines' Largest Island Luzon
18:00 GMTInfrastructure Plan: Pelosi Says She 'Never' Brings a Bill to Floor 'That Doesn't Have the Votes'
17:43 GMTUsyk vs. Fury? Gypsy King's Twitter Like Leaves Fans Buzzing About Possible Heavyweight Clash
16:50 GMTLabour Leader Demands Visas For 100K Foreign Lorry Drivers Amid Global Shortage
16:33 GMTLabour Staff Cuts That Prompted Strike Ballot Due to £2m-a-Year Legal Costs
16:23 GMTDHS Chief Reveals Up to 12,000 Haitians Who Crossed Southern Border Were Released Into US
16:21 GMTTurkey Wants US Military to Leave Syria, Iraq After Afghanistan Withdrawal, Erdogan Says