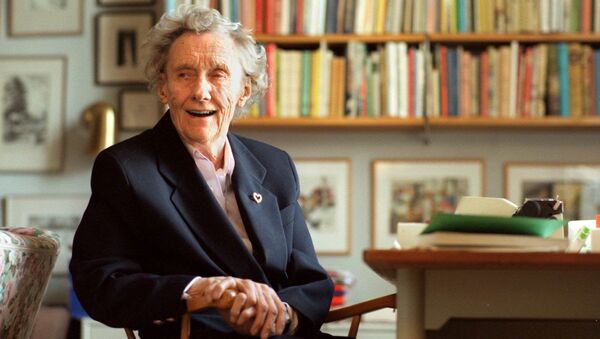 © AP Photo / Pressens Bild, Tobias Rostlund
Subscribe
The platonic love affair between Sweden's most famous children's author Astrid Lindgren, who penned such colorful characters as Pippi Longstocking and Karlsson-on-the-Roof, and German intellectual Louise Hartung has come into the limelight, as the correspondence between the two, numbering several hundred letters, has been published in full.

Crazy, on Drugs or Traumatized? Inside the Mind of Pippi Longstocking
The romance between Lindgren and Hartung started at a book fair in 1953 and ended shortly before Hartung died of cancer in 1965. The new book titled "Jag har också levat!" ("I have also lived") contains over 600 love letters spanning over eleven years, Swedish national broadcaster SVT reported.

According to Astrid Lindgren's biographer Jens Andersen, who authored several books on the world-famous Swedish writer, their first meeting was close to love at first sight, as both became very close and even developed an "almost telepathic" connection. However, Lindgren soon became aware of the fact that she could not return Louse's passionate feelings, Swedish daily Dagens Nyheter reported.

In some of her early letters, however, Hartung went so far as to writing "I want to fondle and kiss your wonderfully beautiful body." According to Andersen, some letters had to be omitted from the book out of respect for Hartung, who obviously longed for a sexual relationship with Lindgren.

Man's World: Swedish Feminists Rebel Against Male Dominance in Textbooks
Although never consummated, the relationship with Hartung was of great importance for Lindgren, who found a confidant in one of Europe's cultural capitals. Before World War II, Berlin intellectual Hartung was part of the artistic group around German playwright Bertolt Brecht and composer Kurt Weill and took part in "The Threepenny Opera" musical. After the war, Hartung stayed in East Berlin and worked with war-traumatized children.

​"Over these eleven years, they read and discussed Goethe and Henry Miller, talked about pornography, the latest movies and classical music," Andersen revealed to SVT, calling Berlin-based Hartung "Lindgren's window to the world."

The Great Escape: Norwegian Prison Break Turns Into Thriller
Additionally, Hartung's vision of quality art and literature as a way of healing children's psychological wounds is believed to have greatly influenced Lindgren's most renowned character Pippi Longstocking, who despite her spontaneous anarchism and rebellious nature remains a good-humored pacifist.

As their relationship progressed, Hartung counselled Lindgren on her work and saw to it that German translations of Lindgren's books maintained the same level of artistic strength and refinement.

The dramatic relationship between Lindgren and Hartung was touched upon in Andersen's 2014 biography of Lindgren "Denna dagen ett liv" ("This day a life") and Kristina Lindström's documentary "A Tale of Astrid Lindgren's Life and Times."

​In a remarkable coincidence, Selma Lagerlöf, Swedish writer, Nobel prize winner and author of the cult children's book "The Wonderful Adventures of Nils," also maintained a long-standing lesbian relationship with Valborg Olander. Lagerlöf and Olander, both suffragettes and using today's feminist parlance, had a chain of love letters spanning over 40 years.

On Tove Jansson and her partner Tuulikki Pietilä — Moomin will always stand for love, courage and tolerance. pic.twitter.com/Dhgnv7v5sH

​Perhaps even more extraordinary is the fact that Tove Jansson, Finnish novelist and comic strip author who is best known as the author of the Moomin books for children, was not averse to same-sex relations either. The Swedish-speaking novelist, who, too, ranks among Scandinavia's best children's writers, maintained a long relationship with graphic artist Tuulikki Pietilä. It is widely believed that character Too-ticky from the Moomin series was modeled after Pietilä.