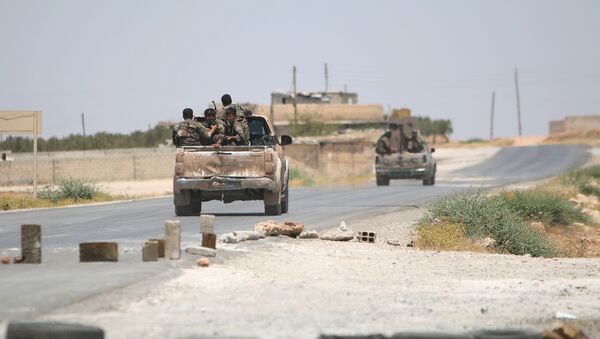 The US-backed Syrian Democratic Forces' (SDF) rebel fighters have announced on Sunday the start of an offensive on Daesh's de facto capital of Raqqa.

Isolating Raqqa: What's Behind Pentagon Changing Its Anti-Daesh Tactic in Syria
The Kurdish-led SDF group said that the United States would coordinate actions with it to "provide air cover" during the Raqqa offensive.

The ground operation in Raqqa would be carried out only by the Syrian Democratic Forces, the SDF said during a press conference in Ain Issa near Raqqa.

The operation to retake Raqqa was dubbed 'Euphrates Rage'. The SDF said that they have created a command center for the Raqqa operation. The Syrian Democratic Forces also called on civilians in Raqqa to leave areas where Daesh terrorists are present, the statement said.

Some 30,000 fighters are to take part in the operation.

"We in the general command of the Syrian Democratic Forces give you the good news of the launch of our big military offensive to liberate the city of Raqqa and its suburbs from the clutches of the terror forces of the dark world, represented by Daesh which made the city the capital of its self-styled caliphate," a female SDF commander said in a TV statement, as quoted by the Rudaw media outlet.

The Syrian Democratic Forces are a rebel group predominantly consisting of Kurdish fighters, as well as of Arabic and Turkmen forces, who are jointly fighting against Daesh terrorist group. The Kurdish People's Protection Units (YPG) are the main force of the SDF group.

Earlier in the day, the defense minister of France, which is part of the US-led coalition against Daesh, said that the Raqqa operation should be begin amid the Mosul offensive in Iraq. "I believe it will be necessary," Jean-Yves Le Drian told Europe 1 radio.

YPG's Involvement in Raqqa Offensive to Exacerbate Tensions Between US, Turkey
In October, the US Department of Defense said the operation to isolate Raqqa would begin in the near future.

On Wednesday, US Secretary of Defense Ashton Carter said that the US continued to discuss Turkey's role in the operation aimed at liberating Raqqa, but added that the campaign will proceed according to plan regardless of the outcome of these talks. On the same day, the US defense chief also indicated that local forces will be the ones tasked with the operation in order to make the victory over Daesh "lasting."

Last week, Turkish Prime Minister Binali Yildirim said that Ankara is not going to participate in the military operation aimed to liberate Raqqa of Kurdish units take part in it.

Earlier, Turkey suggested the partipation of the Free Syrian Army's (FSA) rebel fighters instead of the self-defense forces of the Syrian Kurds in the Raqqa offensive. Ankara opposes SDF’s involvement since the force includes People's Protection Units (YPG), which Turkey considers to be an affiliate of the Kurdistan Workers' Party (PKK), outlawed in the country.