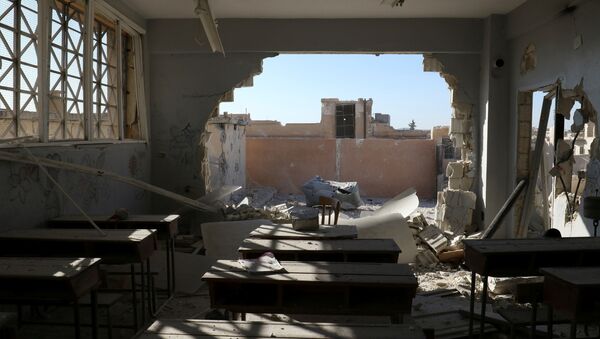 The Russian Defense Ministry has released drone images clearly showing that neither Russian aircraft nor Syrian warplanes could have inflicted damage to a school located in the Syrian town of Haas, the Idlib province, in an attack on October 26 that left at least 22 children and six teachers killed.

"The video footage published by a number of foreign media outlets of an alleged strike on the residential area of Hass consists of more than ten pieces mixed together that were shot with varying resolution at different times of the day," Russian Defense Ministry spokesman Maj. Gen. Igor Konashenkov said. 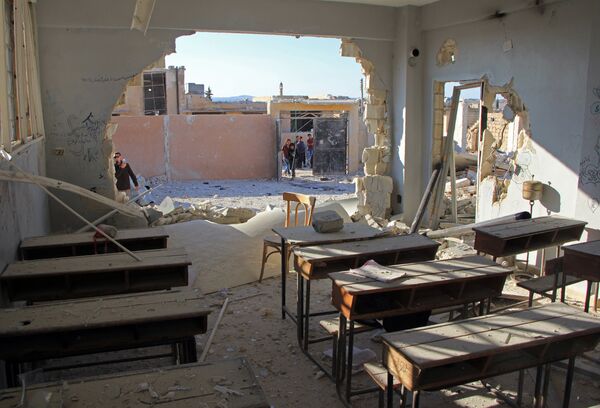 A general view shows a damaged classroom at a school after it was hit in an air strike in the village of Hass, in the south of Syria's rebel-held Idlib province on October 26, 2016.
© AFP 2022 / Omar haj kadour

The photo released by the AFP news agency, the spokesman explained, showed that a single side wall was damaged, with desks remaining in place. Moreover, "a pinkish-colored fence in the picture is intact and lacks even shrapnel damage," the spokesman added.

The Russian Ministry of Defense pinpointed the exact location where the photo was taken and sent an unmanned aerial vehicle (UAV) to make detailed images of the area. The first photo was taken at 8:42 GMT on October 27, a day after the alleged aerial attack took place. A white check mark shows where the school is located. 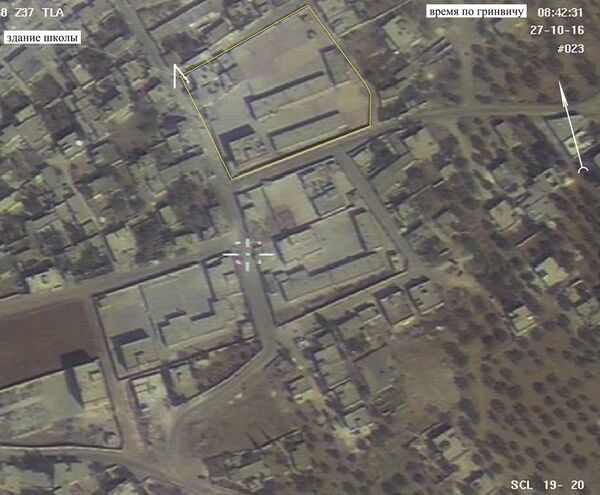 School in the village of Hass, in the south of Syria's rebel-held Idlib province
© Photo : Ministry of Defence of the Russian Federation

The second photo, taken at 8:40 GMT on October 27, shows areas affected by the attack encircled in yellow. 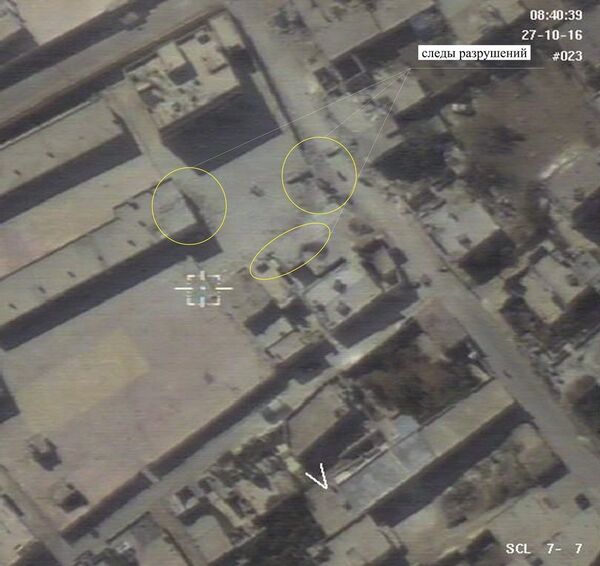 School in the village of Hass, in the south of Syria's rebel-held Idlib province
© Photo : Ministry of Defence of the Russian Federation

"The photo taken by a Russian UAV shows that the roof of the school has not been damaged," Konashenkov said. In addition, "there are no shell craters in the surrounding area."

Furthermore, the spokesman noted that planes operated by the Russian Aerospace Forces did not fly over the entire Idlib province on the day of the attack. "This is an absolute fact," he stated.

Konashenkov further said that Washington could confirm these findings since the Russian military spotted a US-operated MQ-1B Predator attack drone in the area at a time when the Russian UAV was taking images of the school. Despite evidence to the contrary, the White House has blamed Moscow and Damascus for the attack.