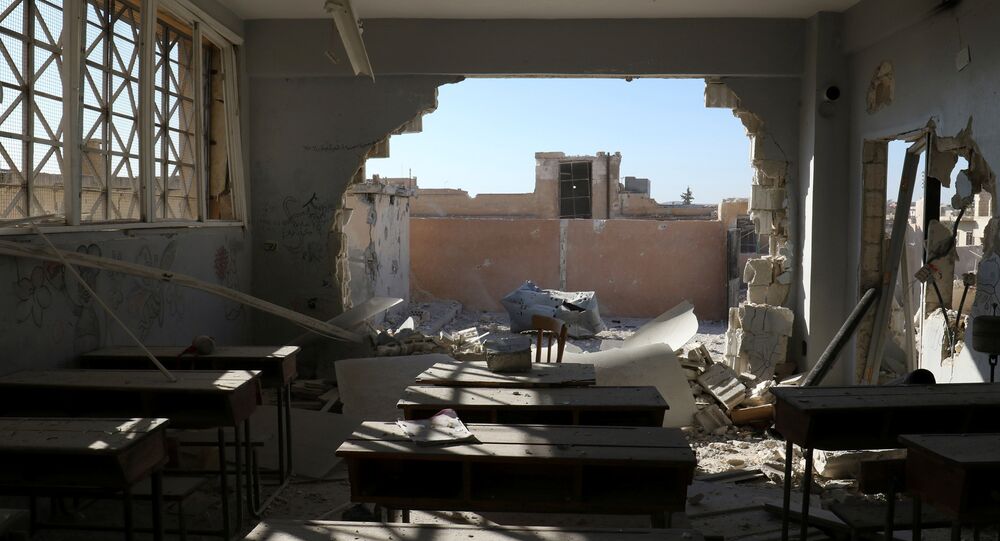 Russian reconnaissance means have registered a US attack drone in the area where a school in Syrua's Idlib had been bombed, the Russian Defense Ministry said Thursday.

A US' MQ-1B Predator drone has been seen in the area, the ministry's spokesman Igor Konashenkov said.

No Russian aircraft entered the area over the Syrian Idlib, where the alleged strike took place, he added.

Moreover, Russian UAVs have not registered any signs of the destruction of the school's roof or shell craters, Maj. Gen. Konashenkov said. A Russian drone has been sent to the area Thursday morning, he added.

"According to a photo made by a Russian UAV, the school's roof is not damaged and there are no bomb craters in the area near the school. Similar imformation may be requested from our American colleagues. Russian reconnaissance means registered a US' MQ-1B Predator attack drone."

Video footage published in media showing the alleged strike on the Idlib school have been fabricated, the ministry added.

"Video footage published by a number of foreign media outlets of an alleged strike on the residential area of Hass [in Idlib] consists of more than 10 pieces pasted together, being shot at different times of the day."

© AP Photo / Gary Cameron
Attack on School in Syria’s Idlib May Amount to War Crime - UN Secretary-General
Moreover, Konashenkov added that the school's fence has not been damaged at all, while if an aerial bomb exploded, "the fence and all the walls of the buildings would have been destroyed and damaged by shrapnel, while the furniture would have been swept away by the shock wave."

According to the spokesman, the photo published by the AFP agency showed that the nature and the extent of the damage sustained by the school were not similar to the destruction caused by airstrikes.

Earlier in the day, the executive director of the United Nations Children's Fund (UNICEF) Anthony Lake said that as many as 22 children and six teachers were killed in an attack on a school in Idlib. Russian Foreign Ministry spokeswoman Maria Zakharova condemned the attack on a school in Syria's Idlib and called for an investigation into the bombing. She also said that international media "launched an attack" on Russia by claiming that Moscow and Damascus are behind the bombing without presenting evidence.

The UNICEF has fallen victim to another hoax by the White Helmets NGO, the Russian Defense Ministry spokesman added.

"Before making statements, UNISEF officials should check the sources of its information," he said, adding that such a respected organization shiuld not undermine its reputation.