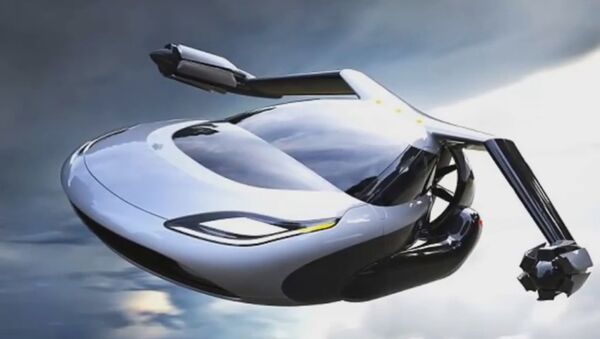 © YouTube/All About AMAZING
Subscribe
A prototype of Google co-founder Larry Page’s highly-secret flying car project has reportedly been caught on camera in California.

According to eyewitnesses, the aircraft looked like a tiny plane, and while hovering 25 feet above the ground, produced a sound comparable to that of a loud electric motor.

In another instance, Steve Eggleston, a DK Turbines manager, said he filmed the same aircraft being towed on the tarmac. The machine depicted in the photo has a single wing, with pod-like structures on the rear, leading him to believe it was Page’s flying car.

​In 2010, Page launched Zee.Aero, a company aimed at constructing vehicles with vertical takeoff and landing capability, that could become “a revolutionary new form of transportation.” The firm hired engineers from the aerospace sector, including NASA, Boeing and SpaceX, and released images and information regarding their concept for an aircraft that doubles as an automobile.

According to patent imagery, the jet has wings on the nose and tail, as well as eight propellers driven by eight engines.

​Last May, the company sent a letter to US Department of Transportation revealing its plans to build an entirely new aircraft. The same month the firm, headquartered in Mountain View, California, rented space at Hollister Airport.

Page has reportedly poured some $100 million into the effort, and has attempted to keep it secret, but Bloomberg made the move public in June.

Future is Now: Flying Cars to Zoom Across the Sky in 2017
The Google co-founder also started another company, named Kitty Hawk, to construct a flying car using a different design than that of Zee.Aero, placing the offices of the two companies about a mile away from each other. The entrepreneur has not commented publicly on either venture, but Bloomberg noted that both endeavors represent a personal ambition for the wealthy capitalist.