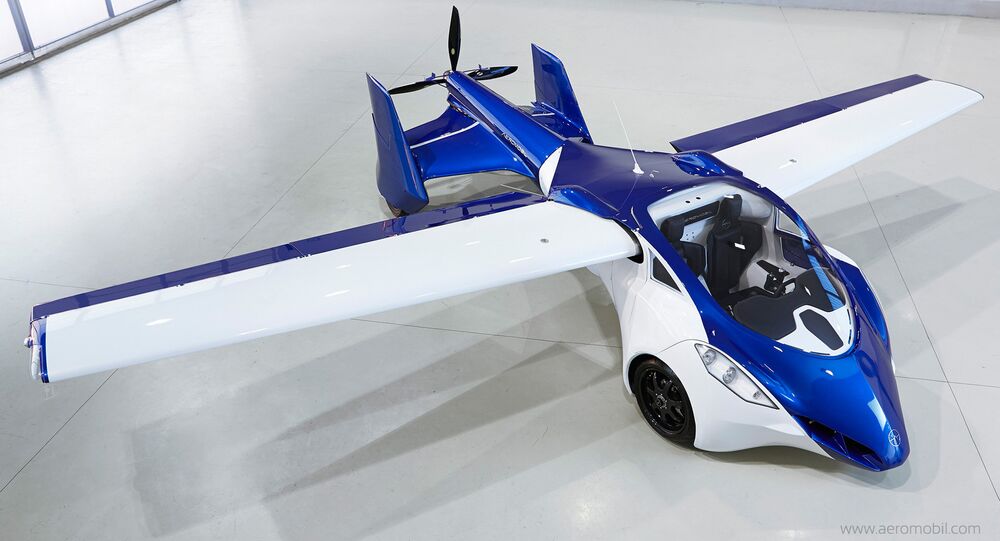 Slovakian automotive company Aeromobil recently announced its plans to start taking orders for flying cars in 2017. The firm also disclosed the price for the wonder-vehicle – it will cost around 200 thousand euro. Find out what other flying cars could give Aeromobil a run for their money.

Bratislava-based manufacturer launched its project in 2010. Since then, three prototypes of the flying car have been tested. The final one, AeroMobil 3.0, dubbed the Flying Roadster will go into mass production in 2018.

Thanks to foldable wings, the two-seated vehicle can be transformed from an automobile to an aircraft in seconds. The head and co-owner of the firm Juraj Vaculík expects that these flying cars would arouse interest mostly among supercar owners.

It is also expected that AeroMobil 3.0, which has a steel frame and a carbon-fiber body, will receive autopilot functions and could be operated as an air taxi.

Since 2006, this small private American corporation has already built few prototypes of roadable airplanes for one pilot and one passenger. Tests of the newest one will be held by 2018.

The manufacturer plans to create a 4-seater version, the Terrafugia TF-X, which will be capable of vertical take-off and landing. It would be the first fully autonomous flying car with batteries rechargeable by the engine. According to the manufacturers, the TF-X will be even capable of avoiding air traffic and bad weather.

The Boston-based company believes that serial production and sale of their flying cars with folding wings, pusher propeller and twin tail, will begin in 2024. Pricing is expected to be roughly US $300,000.

Germany's not left aside: Carplane, a company based in Braunschweig, is developing a flying car with a twin-fuselage configuration. The project looks more like an ultra-light aircraft.

The firm has already demonstrated a prototype with a 151-horsepower engine. The vehicle is equipped with folding wings stowed between the hulls and tail sections. Dual hulls also enable use of full-size car wheels to improve road-handling, while other flying-car designs use smaller aircraft-size wheels to reduce drag in flight.

Sales could begin in 2019, after consultation with EU regulators. The expected price of the wonder-vehicle is about 220,000 euros.

In 2010, Larry Page, known as the developer and one of the founders of Google, established Zee.Aero for the development of vehicles with vertical take-off. The firm located in the heart of Silicon Valley has only patented several sketches of a flying car with folding wings and 10 propellers.

Larry Page has a little soft spot for flying cars, in 2015 he also invested in a similar manufacturer, Kitty Hawk. It is situated a half-mile away from Zee's offices. Kitty Hawk's team, sequestered from the Zee.Aero's staff, is working on a competing design.

In 2011, another German company e-volo created and tested the first electric flying car Volocopter VC1, which looks more like a helicopter. Later, the manufacturer also developed the two-seated VC200 with 18 engines.

Previously e-volo expected to begin mass production of vehicles in 2016, but has not launched yet. The prototype can conduct unmanned flights, being controlled with a joystick. The flight duration will not exceed 1 hour and the maximum speed of the vehicle is 100 km per hour.

PAL-V International was founded in Holland in 2007, though part of its employees have been engaged in a flying car project since 1999. The first shipment of serial aircars PAL-V ONE is scheduled for early 2018; the price is expected to reach 500,000 euro.

The product is a two-seat hybrid car and gyroplane with motorcycle features because of its three-wheel arrangement. PAL-V ONE will be able to obtain speeds up to 180 km per hour in the air and on the road.

The Chinese are also interested in the development of flying cars. State-owned company AVIC already unveiled a prototype of a flying robot car, the Swift Gazelle. It can hover in the air and is capable of a vertical take-off and landing. When the rotors are folded, the AVIC can be driven on usual roads.

The flying robocar can be both autonomous and controlled by a driver. The project is likely to be used in the Chinese army.

Riders on the Sky: Russia Rolls Out a Flying Bike