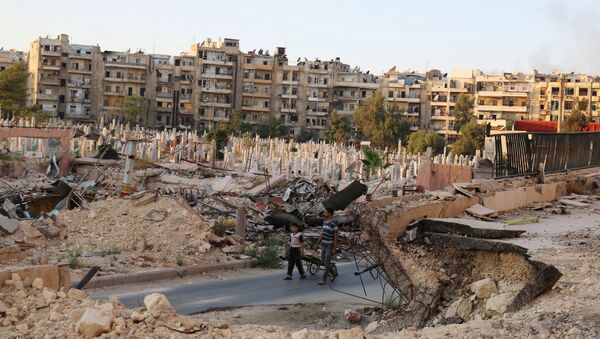 © REUTERS / Abdalrhman Ismail
Subscribe
The situation in Aleppo is changing rapidly, the decision on extending the humanitarian pause in the city will be made taking into account the situation on the ground, Kremlin spokesman Dmitry Peskov said Friday.

Terrorists Sabotage Delivery of Aid to Aleppo, Threaten Civilians - Lavrov
MOSCOW (Sputnik) — A "humanitarian pause" was introduced in Aleppo at 08:00 local time (05:00 GMT) on Thursday to ensure the safe evacuation of unarmed militants, and civilians from eastern Aleppo via eight designated corridors. Later, Russian Defense Minister Sergei Shoigu announced that Moscow had decided to extend the humanitarian pause in Aleppo for another 24 hours.

"It depends on the way the process will continue – until now militants’ exodus from the city has been sluggish, [it depends] on the process of ensuring security of the humanitarian convoy and on the approach the militants will choose, whether they continue aggressive offensives or not, whether they use this humanitarian pause for regrouping, rearmament and equipment modernization of the terrorist groups, set in the eastern parts of the city," spokesman Dmitry Peskov said.